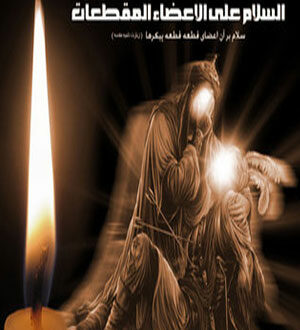 As Muslims around the world are once more coming together to commemorate the tragedy of Karbala and the sacrifice of Imam Husayn (AS), it is important we remember those lessons, the Prophet’s progeny sought to teach humanity – opening a path of light onto those who otherwise would continue to be lost in the darkness.
Today I feel we fail to grasp the universality of Imam Husayn’s bravery, his absolute devotion to the Word of God and the stand he made, not for himself or his family, but for mankind. As his body was pierced with a thousand arrows, as he watched his son, his brother, his kin draw their last breath in the land of Karbala, will we not recognize the message embedded in the cries his voice carried to the Heavens?

Although he knew that his death would come in Karbala, his heart stood still as he showed Men how the faithfuls hold true before tyranny – how the righteous do not give but an inch to treachery and evil. In his arms it was the strength of his father, Imam ‘Ali ibn Abu Talib, in his eyes the love of his mother, Lady Fatimah, and his heart the light of his grandfather, the last Prophet of God, Muhammad ibn Abd Allah (PBUH).
Every year, Muslims around the world commemorate the tragedy of Karbala. They attend morning meetings and processions in which the story of Karbala is retold, lamentations are held and special poetic readers using dramatic techniques and symbolism recite eulogies to mark the events of the day of Ashura. All these commemorative meetings not only serve to convey the events and message of Karbala but also provide opportunities for us to learn about Islam in general.
Sadly the tragedy of Karbala is not being observed and remembered by all Muslims.
Why you may ask? Why indeed! Today Shia Islam most of all remembers its Imam, cries its death and his untimely departure … not because Shia Muslims ever thought that death would never touch Imam Husayn but because his death left them, us, forever orphans.
Because his sacrifice humbled us, all of us. He died so that Islam’s message would live on. He died so that our sons and daughters would remember that before evil, before tyranny, one does not bow or negotiate – not when such bargain entails betraying God’s command.
In the land of Karbala, on the day of Ashura it is a piece of all our souls which was left on the field. And so yes we cry and we beat our chest in mourning … but although we feel sorrow, we also pay tribute to our Imam’s absolute and immeasurable courage and depth of character. And how can anyone ever deny Imam Husayn’s leadership, who could deny our pain when treachery sought to rob us of the light to instead drown us in darkness?
But we remember Ghadeer Khumm, we remember the oath given – we remember that our faith and our love are forever tied with the House of God, for in its people, God entrusted His Word.
And so we will cry and we will remember! But our tears should be all of our tears for they are the tears of Islam and Islam was the religion of all prophets.
In the veins of Imam Husayn flowed the blood of the sons of Ibrahim (AS), when he fell, it was the heir of Islam which was struck by a thousand heretic blades.
And so we will cry and we will remember!
Imagine, it is afternoon on the day of Ashura. Imam Husayn is standing on the blood-drenched soil of Karbala in the heat of the scorching sun, awaiting to meet his beloved. His head is wounded and blood is streaming slowly down his holy face soaking his blessed beard. He looks around, searching for members of his family and his companions, only to find them brutally slaughtered and slain like sacrificial lambs, lying there on the ground soaked in blood. He hears the innocent crying and wailing of the children and the women. Tears flow down his holy face. He takes a piece of cloth to wipe the blood from his face, whereupon an archer from the army of Yazid (may Allah’s curse be upon him) shoots a triple-headed arrow, which lodges into Imam Husayn’s (AS) heart.
He pulls out the arrow causing blood to gush out. The Holy Imam is thirsty. He cries: “O Allah, I am thirsty”, in the meantime another man approaches and shoots an arrow which thrusts into Imam al-Hussain’s (AS) throat quenching his thirst. Hilal bin Nafi’ was reported as saying: “By God I never saw a person getting killed with his own blood all over his body in a better state than al-Hussain. I was so overwhelmed by the radiance of his face that I refrained from contemplating killing him.” Even when the accursed Shimr approached Imam al-Hussain (AS) to severe his blessed head, he said: “When I approached Hussain ibn Ali and my eyes fell on him, the light of his face so gripped me that I forgot my intention to kill him.” It is reported that when Imam Husayn was killed, the sky rained down blood. It has been recorded that Imam Ja’far as-Sadiq (AS) has said:
“…For no one the heavens wept for forty days save Yahya and Hussain…”
And so we will cry and we will remember!
Will you?

Share
Previous Ashoura’ in the Words of Imam Khomeini
Next Mina incident must not be forgotten: Imam Khamenei