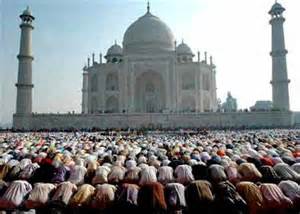 PhD in History, Osmania University, Hyderabad, India
Research Fellow
Islamic Research Foundation
Holy Shrine of Imam Reza (A.S.)
Mashhad, Iran
Email: rezazabet12@gmail.com
India is a land of the great diversities and infinite varieties. It is a country where Hinduism, Buddhism, Jainism and Sikhism emerged. It is the home to the world’s second largest Muslim population. It welcomed Christianity long before Europe embraced it. Christianity was introduced to India by Thomas the Apostle, who visited Muziris in Kerala in 52 CE and baptized Kerala’s Jewish settlements, who are known as Saint Thomas Christians (also known as Syrian Christians or Nasrani) today. Zoroastrianism and Judaism also have an ancient history in India, and each has several thousands of Indian adherents. India has the largest population of people adhering to Zoroastrianism called as Parsis in India.

Religion in India
Religion in India is characterized by a diversity of religious beliefs and practices. India is the birthplace of four of the world’s major religions; namely Hinduism, Buddhism, Jainism and Sikhism.
Islam spread from the West throughout South Asia, from the early eighth century, to become the second largest religion in India. The Muslim population of India is the second largest in the world. India also has the third largest Shia Muslim population in the world. The shrines of some of the most famous saints of Sufism, like Moinuddin Chishti and Nizamuddin Auliya, are found in India, and attract visitors from all over the world. India is also home to some of the most famous monuments of Islamic architecture, such as the Taj Mahal and the Qutb Minar. Civil matters related to the Muslim community are dealt with by the Muslim Personal Law, and constitutional amendments in 1985 established its primacy in family matters.
Religious Symbols of Muslims
Islam is often seen as a religion without any religious symbols or icons depicting God. But in practice, millions of Muslim believers, especially in India, use a variety of popular devotional symbols and images. The popular calendar art of the Muslims sold on the streets of many Indian towns depicts not only images of Makkah and Madinah but also many shrines of Muslim saints, their miracles and folklore, often portrayed as graphically as the Hindu mythical scenes. More importantly, the artists and the industry that produces such art works are not necessarily all Muslim – many are Hindus. Thus it is easy to see Hindu or even Christian symbols being adopted in the Muslim symbols and images.
One also needs to explore how Indian Muslims iconography has not only been legitimized in Islam, but also allowed to thrive in the form of an urban mass culture. The syncretism tendencies of these popular images reflex a larger pluralistic culture that was prevalent through much of South Asia’s past.
However, the local multi-faith shrines, their rituals, images in India continue to invoke fervor among devotees. When all possible efforts fail to solve a particular problem in someone’s life, she or he is ready to go to any extreme – any god, deity, priest, or house of worship that may resolve the crisis. People in distress often help each other with a little talisman, a Prasad from Tirupathi to cure a disease, or a Tawiz from shrines of Muslim saints to get the ideal job. The religious posters industry, which produces many colorful talismans too, keeps growing as long as the people’s devotional needs get fulfilled. But interestingly, the Muslim Ulama in India does not raise any objection to these graphic depictions, some of which in reality could be rather provocative to a purist Muslim’s eye. Is it because these images circulate mostly among poor or rural Muslims, whose faith may be more icon-dependent, compared to their elite/urban Muslim brethren who follow a more iconoclastic and monotheistic faith. The role of the market certainly cannot be ignored in the propagation of this popular religious visual symbols and images that keeps a multifarious Islam alive in India.
Islam, the Harbinger for Interfaith Understanding in India
Allah means God in Arabic and Allah is identification with Islam. Some symbols, such as the color green, have been associated with Islam for a long time and in many areas. Muslim art like Islamic calligraphy often uses such symbols to represent complex ideas. Islamic architecture may also incorporate such symbols in the decoration of religious edifices such as mosques, khanqahs, and dargahs. The Holy Quran does not specify any symbols or colors for Islam; these Islamic symbols are results of the understandings and imaginations of Muslim artists, scholars and thinkers.

Green in Islam
The colour green has a special place in Islam. It is used in the decoration of mosques, the bindings of Qur’ans, the silken covers for the graves of Sufi saints, and in the flags of various Muslim countries. Green has been associated with Islam for many centuries. The colour green has been considered especially Islamic for centuries.
Star and Crescent
The crescent was not a symbol used for Islam by Holy Prophet Muhammad (S.A.W.A.).Many Islamic nations and charities use the crescent symbol on their flags or logos. The new moon crescent ‘hilal’ is considered as an Islamic symbol. The color white is often believed to symbolize purity and peace. Many Muslims wear the color white when they attend Friday prayers.
Star and Crescent became the symbol of Muslims of Indian sub-continent and it was originally a symbol of the Ottoman Empire which ruled Turkey, Balkans and most of the Middle East till 1922. Ottoman flag was known from West Africa to the Far East, and helped to popularize the crescent and star among the Muslim populations of many countries of Asia and Africa. During the past two centuries the crescent and star has featured on the flags of other Muslim countries.
The color black is considered the color of mourning in Western and Mediterranean countries; however, it is considered a color of modesty in Islam. It is often worn by Shi’a Muslims, who mourn the martyrdom of Imam Husain (A.S.) at the Battle of Karbala. Among the Shi’a Muslims, a black or green turban is worn only by male Sayyids, men who descend from Holy Prophet Muhammad (S.A.W.A.) through his daughter Hazrat Fatimah Zahra (A.S.) and his son-in-law Hazrat Ali (A.S.).
While the color red has no special significance in Islam, it is commonly used on the flags of Muslim countries. Also, the Red Crescent is the Muslim equivalent of the Red Cross.
After the arrival of Islam in India it gradually won over a large indigenous population to its fold. Due to this joining ranks a large indigenous population which brought along previous religious orientations into the faith upon conversion. Thus, Islam in India has retained some typically indigenous taste. Islam since its emergence in India was always the harbinger for interfaith understanding in this region.

Pages: 1 2 3 4 5
Share
Previous My journey to Islam
Next Repentance Indicates the Truth of Islam