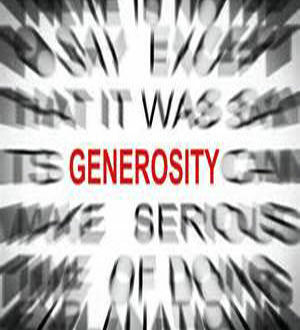 Generosity is the opposite of stinginess. It stands for offering money, food, or any other lawful gaining out of one’s free will. It is in fact the worthiest nature. As a sign of the unprecedented virtue of generosity is that you see every precious and appreciable thing is described as generous. For example, God says:
“This is a generous Quran (56:77).”
“A generous messenger came to them (44:17).” “And corn-fields and generous mansions (44:26).”
The The Ahlul-Bayt (a) therefore praised generosity laudably:
Imam as-Sadiq related that the Prophet (S) said:
“The best men in view of faith is the most openhanded1.”
“The generous is close to Allah, close to people, and close to Paradise. The stingy is remote from Allah, remote from people, and close to Hell2.”
Imam al-Baqir (a) said: “A generous young man who is plunging in sins is favorable, in the sight of Allah, to a niggardly old man who plunges in worship3.”

“Spend and be sure that Allah will recompense you. Any male or female servant of Allah who behaves stingily in a field that pleases Allah will surely spend many folds in a field that displeases Him4.”
Advantages of Generosity
A society cannot feel happy or tranquil unless its individuals feel the spirit of mutual sympathy and harmonize with each other in feelings and senses. Such being the case, the society will be just like a compact building. Mutual sympathy has a bright picture that shines with beauty and brilliance. Undoubtedly, the noblest, most beautiful, and most everlasting picture of mutual sympathy is the feelings of the wealthy individuals for the poor. Such feelings will surely ease the pains of poverty.
By the application of this noble humane principal, (namely, the principals of mutual sympathy) the poor will bear the feelings of amicability towards the wealthy, and this will help the community live happily.
From this cause, the Islamic Sharia has called for openhandedness and sympathy with the poor, and condemned the societies whose individuals suffer starvation and deprivation without finding any one who extends the hand of help towards them. It has also regarded the wealthy who do not help the poor as being very far-off Islam.
The Prophet (S) said: “He who begins his day without caring for the affairs of the Muslims is not a Muslim.”
“He who passes a night satiated while his neighbor is hungry has never believed in me. On the Day of Resurrection, Allah shall not look at the inhabitants of a village one of whose individuals is hungry5.”
Fields of Generosity
Virtues of generosity vary according to its fields. The noblest virtue of generosity, however, is carrying out the obligations of the Sharia, such as the zakat6, khums7, and the like.
The Prophet (S) said: “The most generous is he who fulfills that which Allah has deemed obligatory upon him8.”
Then comes the second criterion of generosity, which is the settlement of the dependents’ needs. In addition to its being obligatory in the sight of both the Sharia and traditions, this matter is very important because, naturally, a man’s family members are the worthiest of his charity and kindness.
Some individuals may behave abnormally in this regard. They may ignore this genuine natural principal and go on conferring generously on the strangers for seeking reputation, while they behave stingily with their family members who, such being the case, will live in neediness and suffer poverty. Such irregular behaviors are originated from meanness and foolishness.
Imam al-Kadhim (a) said: “Man’s dependents are his prisoners. Anyone upon whom Allah confers with graces should be generous towards his prisoners. If he does not, he will soon be deprived of these graces9.”
Imam ar-Rida (a) said: “Man should save the requirements of his family members’ lives, so that they will not hope were he dead10.”
It is a big mistake to deprive the relatives of such emotions and pour them on the foreigners, because such behavior is regarded as barefaced disgrace that arouses the relatives’ hatred and deprives of their sympathy. The true generous should begin with the nearest and the most beneficiary in his endowments, such as friends, neighbors, and people of virtue, because such classes are worthier of being treated generously.
Incentives of Generosity
The incentives of generosity vary according to individuals and reasons of openhandedness. The noblest incentive in this regard is that which is offered for the sake of God. The incentive may be the desire for gaining praise and glory and, in this case, the generous is regarded as the merchant who bargains with his generosity. The incentive may, also, be the desire for gaining something or being saved from a fearful harm. These two matters encourage generosity.
Love plays the greatest role in the encouragement on openhandedness for attracting and drawing the emotions of the beloved.
It is worth mentioning that the results and fruits of generosity will not be sweet unless it is freed from the reproachful reminding of the favor, the blemishes of procrastination, and the appearances of exaggeration.
Imam as-Sadiq (a) said: “Favors are worthless unless they are disregarded, veiled, and provided immediately. If you disregard your favors, you will surely revere the one to whom you have done that favor. If you cover up the favors that you do, you will surely accomplish your deeds. If you offer your favor as soon as possible, you will surely give it pleasantly; otherwise, you will destroy and give unpleasantly11.”

Pages: 1 2
Share
Previous Charlie Hebdo and Tsarnaev’s trial: Cui bono?
Next The Dawning of a New Monetary System and the Final Death of bogus US Dollar?