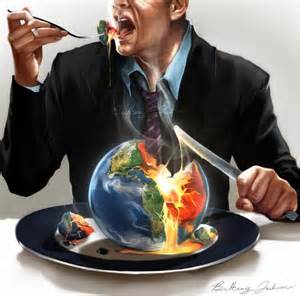 Satisfaction is to please oneself with the minimal necessities that meet the needs and to neglect everything additional. It is a noble trait revealing dignity and high moral standard:
Imam as-Sadiq (a) said to the man who complained about his increasing greed: “If you think it is fortunate for you to have only what suffices you, then you will be sufficed with the least needs of this world. If you think it is not sufficient for you to have the minimum needs of this world, then all the worldly pleasures will not suffice you1.”

Imam al-Baqir (a) said: “Beware of aspiring after that who is higher than you are. You should regard sufficient for you what Allah said to His Prophet: ‘Do not be admired by their fortunes or sons.’ ‘Do not extend your eyes to the pleasures of the worldly life which we had given as enjoyment to some of them.’ If you are afflicted with such feelings, you should then remember the lifestyle of the Prophet (S). His food was barley, sweets were the dates, and firewood was the leaves of date-palm trees if found2.
“He who satisfies himself with that which Allah has given to him is surely the richest of people3.”
The satisfied is surely the richest of people because richness, in reality, is not to need for people. The satisfied is content and convinced with that which God has given to him; therefore, he does not need people and does not ask anyone except God.
It was related that when Galen, the famous Greek physician, was dead, people found in his pocket a sheet of paper with the following script:
“Everything that you earn moderately is for the good of your body. Everything that you give as alms is for the good of your spirit. Everything that you leave behind you is for the good of others. The charitable is alive even if he is taken to the other abode. The wrongdoer is dead even if he is in this world. Satisfaction covers the defects. Moderation increases the much amount. For son of Adam, there is nothing more helpful than trust in God4.”
Advantages of Satisfaction
Satisfaction has a remarkable influence on the individuals’ lives. It achieves physical and mental relaxation, and breathes the spirits of honor, disdain, and chastity. The satisfied is in fact happier, more tranquil, and meeker than the greedy. Furthermore, satisfaction supplies with spiritual awakening and discerning, and urges to ready for the life to come, practice righteous deeds, and gain the incentives of happiness.
It is related that al-Khalil Ibn Ahmed al-Farahidi5 was suffering starvation among the poor people of Basra while others were benefiting by the profits of his writing works. Once, Sulaiman Ibn Ali the Abbasid summoned him to attend in al-Ahwaz for teaching his son. Al-Khalil served the messenger of Sulaiman few pieces of dry bread and said: “You can eat this because I do not have anything else. As long as I can find such pieces of bread, I am not in need for Sulaiman.”
When the messenger asked al-Khalil for an answer for Sulaiman, the latter said as poetic verses–: “Tell Sulaiman that I am not in need for him since I am rich but without possessing any fortune. The true poverty lies in one’s spirit, not in the scarce of money. The true richness, as well, lies in one’s spirit, not in the abundance of fortune. Sustenance is measured and already decided. Weakness will not decrease the sustenance, and frequent movements will not increase it6.”
Othman Ibn Affan, once, sent a bag of dirhams to Abu Dharr and told the slave who would carry them that he would be manumitted if Abu Dharr would accept it. Abu Dharr, however, did not accept that present in spite of the slave’s importunate insistence. “Please,” said the slave, “accept it, for I will be manumitted if you do.” Abu Dharr answered: “But I will be enslaved if I do7!”
Deoganes al-Kelbi was one of the famous wise men of Greece. He was so ascetic. He did not possess anything and did not live in a house. Alexander, once, summoned him. He said to the messenger of Alexander: “Tell him: the same thing that prevented you from coming to me has prevented me from coming to you. You did not come to me because you are not in need for me out of your power, and I will not come to you because I am not in need for you out of my satisfaction8.”
Al-Mansour, the Abbasid caliph, wrote a missive to Abu Abdullah as-Sadiq (a): “Why do you not visit us like the others?” The Imam answered: “We do not have any worldly pleasure that we anticipate you to stop, nor do you have any matter of the world to come for us that we expect to gain from you, nor are you enjoying bliss on which we should congratulate you, nor are you suffering a misfortune for which we should console you.” Al-Mansour wrote: “You may accompany us so that you will advise us.” The Imam answered: “He who seeks the worldly pleasures will not advise you, and he who seeks the world to come will not accompany you9.”