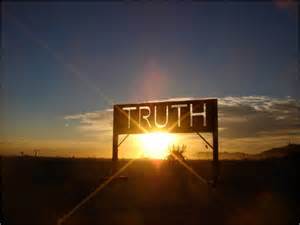 Truth stands for the conformity between word and deed. It plays a great role in the lives of both the individuals and communities. Truth is the beauty of speech and ground of success. From this cause, the Islamic Sharia (The Islamic code of religious law, based on the teachings of the Quran and the traditional sayings of Prophet Muhammad (S)), in both the Quran and Sunna,( Sunna is the body of Prophet Muhammad’s words, deeds, and confirmations) glorified and urged telling truth:
“Those who have brought the truth and those who have acknowledged it are those who have fear of Allah. They will receive whatever they want from their Lord. Thus is the reward of the righteous ones.” (39:33-4)

“Allah will say, “This is the Day when the truthful ones will benefit from their truthfulness.” (5:119)
“Believers! Have fear of Allah and always be friends with the truthful ones.” (9:119)
The Prophet (S) said: “Truth is the adornment of speech.”
Imam as-Sadiq (a) said: “Do not be deceived by their very much offering of prayers and observance of fasting. In fact, prayers and fasting have become habits that they feel desolate if they omit them. You should test them by their truthfulness and fulfillment of trusts.”
“The deeds of the truthful are growing.”
This means that the deeds of the truthful are ongoing and their rewards are, too, growing. Thus, God accepts only the deeds of the pious ones. Truth, then, is one of the most significant characteristics of piety.
Achievements of Truth
The publicity of mutual understanding between individuals is a social necessity. If they commit themselves to so, they will have the ability to shoulder the burdens of life and enjoy a peaceful coexistence. It goes without saying that tongue is the instrument of mutual understanding and the translator of the various concepts that rove in people’s minds. It therefore plays a serious role in the existence of communities and the harmony of individuals’ feelings and ideas.
The happiness or distress of any society depends upon verbal truthfulness or falsehood. If tongue is truthful in interpreting the emotions, it will fulfill the mission of communication. If it, on the other hand, is characterized by mistranslation and misrepresentation, it will be the guide to evil and the means of social destruction. Hence, truth, whose effects and reflections play the greatest role in the individuals’ lives, is a social necessity.
Parties of transactions, for instance, can save themselves and times from the fatigue of bargain if they adhere to truthfulness. If all people observe truthfulness, they will gain its innumerable benefits and advantages. If untruth, on the other hand, becomes a common phenomenon in a society, the moral principles will be flimsy, mutual understanding will be missing, and the society will be the subject of disarrangement.
Parts of Truth
• Truth of speech: It stands for telling the very reality of a thing without falsification or concealment.
• Truth of deeds: It stands for the conformity of deeds with words, such as the commitment to oath and fulfillment of pledges.
• True determination: It stands for the determination to do good.
• True intention: It stands for purifying the intent from blemishes of showiness.
Untruth
Untruth denotes the disconformity of speech with reality. It is surely the source of evils. From this cause, the Islamic Sharia has banned untruth, censured the untruthful, and threatened them through numerous texts in the Quran and Sunna:
“Allah does not guide a transgressing liar.” (40:28)
“Woe to every sinful liar!” (45:7)
“Those who do not believe in the miracles of Allah invent lies and they are liars.” (16:105)
In the Farewell Pilgrimage1, the Prophet (S) said: “Forging lies against me has been common to a great extent. However, it will increase. He who forges lies against me intentionally should find himself a place in Hell. When you receive any hadith, you should first measure it according to the criteria of the Quran and my Sunna. If it conforms to them, you will then adopt it. If not, you should then throw it away2.”
Amirul-Mu’minin (a) said: “Persistence on telling untruths brings about poverty.”3
Imam al-Baqir (a) said: “Allah has made locks for the evil and made drinking wine the master key of all these evils. Untruth, in fact, is eviler than drinking wines.”4
“Telling untruths is the destruction of faith.”5
“Ali Ibn al-Hussein (a) used to say to his sons: Avoid telling untruths, whether they were significant or venial, or in serious or humorous situations, for a man who tells a trivial lie will surely dare to tell a big one. Know that the Prophet (S) said: A servant persists on telling only the truth until Allah records him as truthful. The teller of lies, on the other side, keeps on telling untruths until he is recorded with Allah as liar.”6
Jesus (a) said: “He who tells very much untruth will lose brightness.”7
Disadvantages of Untruth
• Untruth brings about ill reputation and indignity. The liar will never be believed even if he tells truths. His testimonies, too, are not admitted, and his promises are not trusted. One of the manners of the liars is that they forget their previous untruths and invent new ones totally contrary to the previous. A liar often invents a number of contrasted untruths as a support of a previous one.
• Untruth causes mutual mistrust and creates feelings of apprehension.
• Untruth produces waste of time and efforts that are exerted for distinguishing between reality and falsity.
• Untruth has many disadvantageous spiritual effects.
Reasons of Untruth
• Habit: An individual may have the habit of telling untruths because of ignorance, influence of the surroundings, or feebleness of the religious restraint. A wise man said: “It is so difficult to wean him who found sweet the suckling of untruth.”
• Greed: It is surely one of the strongest incentives of untruth.
• Enmity and envy: These two things have very often induced to invent false accusations and fabricate libels against enemies. The righteous individuals who promote themselves against plunging in the wrong have frequently had to suffer the tragedies of false accusations.

Pages: 1 2
Share
Previous What to Say When They Say It’s Impossible
Next Clemency and Suppression of Anger