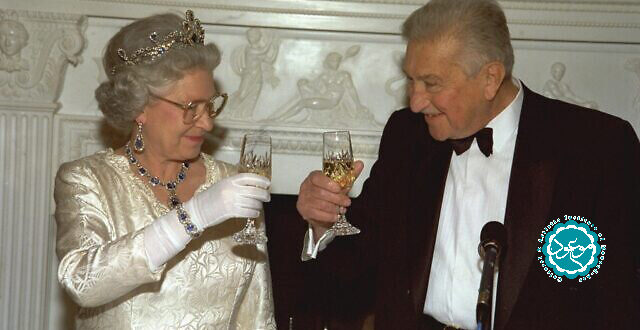 “Mouood” has quoted this article from Times of Israel without any interference.

Herzog notes ‘the end of an era’ as Tel Aviv city hall lit up with UK flag to commemorate late monarch; World Jewish Congress hails her ‘refusal to flinch in the face of evil’
Israeli leaders on Thursday mourned the death of Britain’s Queen Elizabeth II after a record-setting reign of 70 years.

Elizabeth took the throne following the death of her father King George VI in 1952, just four years after a then-nascent Israel was founded.

“On behalf of the Government and people of Israel, I send my condolences to the Royal Family and the people of the United Kingdom on the death of Her Majesty Queen Elizabeth II,” said Prime Minister Yair Lapid. “She leaves behind an unparalleled legacy of leadership and service.”

“May her memory be for a blessing,” he added, using a traditional Jewish phrase of commemoration.

President Isaac Herzog said the queen’s death was “the end of an era.”
“Queen Elizabeth was a historical figure — she lived history, created history and left behind her a magnificent and inspiring legacy,” he said.
Herzog expressed condolences to King Charles, the former Prince of Wales who became monarch upon his mother’s death, the rest of the royal family and the British people, while hailing Elizabeth as a “symbol of stable and responsible leadership” in a world that changed dramatically during her rule.

“The Queen served the international community over 70 years, and under her reign, UK-Israel relations flourished. My thoughts are with the UK today,” Defense Minister Benny Gantz tweeted.
Opposition leader Benjamin Netanyahu hailed the late monarch as “a beacon of integrity and a steward of a second Elizabethan age which will be remembered down the centuries.”

Israel’s Ambassador to the UK Tzipi Hotovely said the queen “was admired around the world as an inspirational and beloved stateswoman.”

“Israel stands with the Royal family and the British people in mourning the loss of The Queen,” Hotovely wrote on Twitter.

The Tel Aviv Municipality lit up the city hall building in the colors of the UK flag to commemorate the queen.

Jewish groups in the UK and elsewhere also mourned the queen’s death.

British Chief Rabbi Ephraim Mirvis eulogized the queen as the embodiment of Britain’s “most noble values.”
“Every week we have prayed for her welfare, well-being and wisdom, and she has never let us down,” he said, remembering “the warm relationship” she had with British Jews.

“Her affection for the Jewish people ran deep and her respect for our values was palpable.”

The Board of Deputies of British Jews umbrella group said that “no words can fully describe the extent of our nation’s loss; Her Majesty’s wisdom, benevolence and dedication to duty served as an inspiration to generations. May Her memory be for blessing.”

The World Jewish Congress said Jewish communities in the United Kingdom and Commonwealth “have flourished and grown in peace and security” while Elizabeth was monarch.

“She and her family were beloved symbols of resistance to Nazi tyranny,” the group’s president Ronald Lauder said in a statement. “Queen Elizabeth’s refusal to flinch in the face of evil, but instead to fight it with every formidable fiber of her character, will be an inspiration for generations to come.”