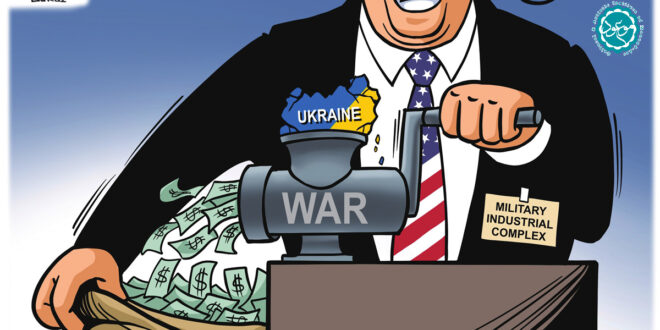 According to Mouood, quoting by Global times:

After the latest round of talks between Russia and Ukraine in Turkey on Tuesday, both sides said the negotiations released positive signals. Ukraine proposed adopting neutral status in exchange for security guarantees from the international community. Russia said the country would sharply cut military activity around Kiev and Chernihiv.

But such positive signals were clearly not what the US wants.

On Wednesday during White House press briefing by Communications Director Kate Bedingfield, when she was asked “Is the US willing to become a guarantor of Ukraine’s security or considering that option?” Bedingfield said, “We are in constant discussion with Ukrainians about ways that we can help ensure that they are sovereign and secure. But there’s nothing specific about a security guarantee that I can speak to at this time.”

Some Chinese netizens mocked that Bedingfield’s remarks was like “We won’t give any security guarantee without you falling.” It reflects that the US doesn’t want to see Ukraine and Russia get along peacefully. Li Haidong, a professor from the Institute of International Relations at China Foreign Affairs University, believes the US takes Ukraine as a tool to make Russia bleed, so Washington will sustain its support to Kiev. “If Ukraine and Russia reconcile, the US won’t be able to make Russia bleed to the last drop of blood,” Li told the Global Times.

In addition to refraining from a security guarantee, which will lead to de-escalation of the situation, the US also urged caution on the Russian pledge that it will reduce military operations. Reports said Ukrainian President Volodymyr Zelensky informed US President Joe Biden on the progress of the peace talks on Wednesday in a phone call, during which Biden told Zelensky that the US will send an additional $500 million in aid to Ukraine. It was also reported that Zelensky published a video address after the call, saying that Russia scaled back military operations around Kiev because Ukrainian troops’ defense has forced Russia to do so.

The conflict has bonded Ukraine tighter to the US, and Kiev will act more in accordance to Washington in the future. Zelensky’s video address was already a clue. If we see it from another angle, it was like: The US said, “Ukraine, you need to continue the stalemate with Russia so that I can help you out,” and Ukraine answered, “OK, I’ll do something.”

Li said another reason the US doesn’t want to settle the Russia-Ukraine crisis soon is it wants to use the crisis to effectively control Europe and marginalize Russia while consuming more of its strength. Given the recent events led by the US, Washington has at least realized part of its goals. For example, the US and the EU signed historic deal on gas – superficially, the deal aims to help Europe reduce dependence on Russia, but essentially it will make Europe more dependent on the US.

On March 24, NATO reaffirmed it “will continue to provide further political and practical support to Ukraine” and “allies are substantially increasing their defense expenditures.” By enhancing the role of NATO, the US ties Europe more firmly to its chariot; and through its dominant position, the US has forced Europe to take its side by escalating crisis and even war. The ultimate goal is to constantly put Europe under its control.

While pouring cold water on the Russia-Ukraine peace talks, the US is stepping up its efforts to stir the conflicts. This is in line with US strategic needs. If Ukraine’s appeal for a security guarantee is met, a new model of international security guarantee will be opened up, which will mean weakening the role of the US and NATO. The US clearly doesn’t want to see this result. It can be said that the US is the biggest spoiler of the security in the entire Europe. The US is the most reluctant to see a cease-fire between Russia and Ukraine.