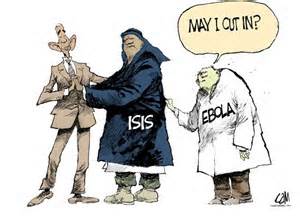 ISIS and Ebola: 2 Contrived & Convenient Enemies for You to Fear

ISIS and ebola are two very contrived and convenient enemies
served up on a silver platter for the general population to fear. With these convenient enemies, the NWO (New World Order) elite can carry out some of the most cherished items on their agenda: with ebola, scaring the hell out of everyone, passing draconian new quarantine laws, enacting these laws, selling vaccines, carrying out forced vaccinations, engaging in depopulation, and injecting people with the virus through the vaccine; with ISIS, invading and occupying Syria, further dividing the Arab world, helping to expand “greater Israel”, weakening the Muslims (by encouraging in-fighting) for future exploitation by Zionism, drawing Iran, China and Russia into the conflict, and triggering World War III.
ISIS is Created and Funded by the US-UK-Israel Axis

ISIS (also referred to as ISIL or IS) is a group that has seemingly emerged from nowhere in mid-2014 to suddenly take huge portions of land in Iraq. ISIS is funded start to finish by the US-UK-Israel axis of powers. They are an incredibly convenient new enemy for Americans to fear and hate. Since ISIS exists, the US Government has had a pretext to:
1. Re-invade Iraq;
2. Invade Syria;
3. Set up a buffer zone/no-fly zone over Syria (because ISIS conveniently developed an airforce); and
4. Get US military forces within striking distance of Syrian President Bashar Assad, who they have been trying to topple for years.
At every step along the way, ISIS has allowed them to do what they could not easily have otherwise done. It has always been the excuse to increase aggression, in the style of the Hegelian dialectic, playing off people’s knee-jerk reaction that “we’ve gotta do something”. How convenient! Will ISIS rival and come to outrank that other CIA creation, Al-Qaeda, the “Database”, in terms of usefulness to the NWO? One thing you can be sure of: they are a contrived bogeyman, and once they have played their part, they will be discarded, disbanded, destroyed and forgotten like all the other useful idiots used to further the agenda of world domination.
Ebola is a Mass Psychological Operation
ISIS and ebola serve different purposes. The former is more about geopolitics and world conquest, but the latter is more about domestic control and vaccine-pushing (although it also serves as an excuse to inch ever more closer to a centralized compulsory world medical system, based on the Rockefeller-funded allopathic model of drugs, vaccines, radiation and surgery). Ebola may be a real virus, but the ebola hype phenomenon of the last few months has signs of being an elaborate hoax, as I have documented with many links in my article “Ebola: Hoaxing It Up!“. Look at the following things that are occurring because of the hype surrounding ebola:
1. General panic and fear of getting the disease;
2. States like Connecticut passing new quarantine/forced vaccination laws, in addition to Obama’s Executive Orders earlier this year;
3. Constitutional and Civil Rights being suspended because of a “state of emergency”; and
4. Tekmira, along with Monsanto and the DoD, getting ready to roll out an ebola vaccine that, for all we know, may contain the virus itself.
ISIS and Ebola = Al Qaeda and Swine Flu
The elite leaders know the public has a shockingly shallow memory. People tend to forget news stories very easily. But it really wasn’t very long ago (5 years to be exact) that we were all being warned about the very dangerous H1N1 swine flu. The WHO declared its first ever “public health emergency of international concern” and a “Level 6 Pandemic”, yet according to its figures, this supposedly global pandemic only killed 18,000! Or, as Gary Null concluded in his 2011 study Death by Medicine, about as many people as it takes Western medicine to kill in 8 days (at the rate of 2,147 per day).
As Jon Rappoport reports, the CDC stopped counting cases “because the tests of patients who most likely had Swine Flu didn’t have Swine Flu at all, and most of them didn’t have any kind of flu. In other words, the whole Swine Flu “epidemic” was a bust. A dud. This was apparent from Attkisson’s article. The CDC was lying through its teeth.”
Ebola 2014 = Swine Flu 2009. Are we going to learn from this scam or get fooled again?
The Dysfunctional State Always Has, and Always Will, Concoct Fictional Enemies like ISIS and Ebola
In 1984, George Orwell wrote about how the dystopian State always exists in a permanent state of war. It needs to war to sustain its power, economy and existence, and it needs new enemies against whom to fight this perpetual war. However, this isn’t just about war. The dysfunctional State needs new enemies on every front. It sustains itself on fear, and thinks of itself as the protector of all, even if it has to literally invent non-existent threats to justify its behavior. If the State were a mental patient, it would be diagnosed as a psychopath, a pathological liar, having massive delusions of grandeur and having a militaristic mindset that excels at making enemies out of everyone and everything. US Presidents are always declaring a war on something, from the War on Drugs to the War on Poverty to the War on Terror. The dysfunctional State is run by equally dysfunctional “leaders” with equally insane mindsets.
If we really want global peace and freedom, we need to heal our own insane tendencies through inner spiritual work, and also look closely and critically at the psychology behind the State and its (mis)leaders. ISIS and ebola are a chance for us to wake up the agenda.
Want to keep informed on the latest and greatest news and analysis on the New World Order, Natural Health, Sovereignty and more?

Makia Freeman is the editor of The Freedom Articles and senior researcher at ToolsForFreedom.com, writing on many aspects of the the global conspiracy, from vaccines to Zionism to false flag operations and more, and also including info on natural health, sovereignty and higher consciousness.