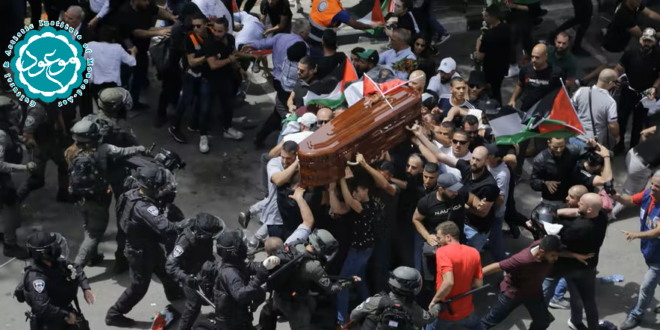 According to Mouood, qouting by TheConversation:

Israeli police attacked mourners carrying the coffin of slain Palestinian-American journalist Shireen Abu Akleh on May 13, 2022, beating pallbearers with batons and kicking them when they fell to the ground.

Yet those who skimmed the headlines of initial reports from several U.S. media outlets may have been left with a different impression of what happened.

“Israeli Police Clash with Mourners at Funeral Procession,” read the headline of MSNBC’s online report. The Wall Street Journal had a similar headline on its story: “Israeli Forces, Palestinians Clash in West Bank before Funeral of Journalist.”

Fox News began the text of its article with “Clashes erupted Friday in Jerusalem as mourners attended the burial of veteran American Al Jazeera journalist Shireen Abu Akleh who was shot dead Friday when covering a raid in the West Bank city of Jenin.”

There is no mention in the headlines of these articles about who instigated the violence, nor any hint of the power imbalance between a heavily armed Israeli police force and what appeared to be unarmed Palestinian civilians.

Such language and omissions are common in the reporting of violence conducted by Israel’s police or military. Similar headlines followed an incident in April in which Israeli police attacked worshippers at Jerusalem’s Al-Aqsa Mosque during the Muslim holy month of Ramadan. Then, too, police attacks on worshippers – in which as many as 152 Palestinians were injured by rubber bullets and batons – were widely described as “clashes.”

And headlines matter – many Americans do not read past them when consuming news or sharing articles online.

Neutral terms aren’t always neutral
The use of a word like “clashes” might seem to make sense in a topic as contentious as the Israeli-Palestinian conflict, in which violent acts are perpetrated by both sides.

But as a scholar of Palestinian history and an analyst of U.S. media coverage of this topic, I believe using neutral terms such as “clashes” to describe Israeli police and military attacks on Palestinian civilians is misleading. It overlooks instances in which Israeli forces instigate violence against Palestinians who pose no threat to them. It also often gives more weight to official Israeli narratives than to Palestinian ones.

U.S. media have long been accused of misleading their audience when it comes to violence committed against Palestinians. A 2021 study from MIT of 50 years of New York Times coverage of the conflict found “a disproportionate use of the passive voice to refer to negative or violent action perpetrated towards Palestinians.”

Using the passive voice – for example, reporting that “Palestinians were killed in clashes” rather than “Israeli forces killed Palestinians” – is language that helps shield Israel from scrutiny. It also obscures the reason so many Palestinians would be angry at Israel.

It’s not just The New York Times. A 2019 analysis by data researchers in Canada of more than 100,000 headlines from 50 years of U.S. coverage across five newspapers concluded that “the U.S. mainstream media’s coverage of the conflict favors Israel in terms of both the sheer quantity of stories covered, and by providing more opportunities to the Israelis to amplify their point of view.”

That 2019 study also found that words associated with violence, including “clash” and “clashes,” were more likely to be used in stories about Palestinians than Israelis.

Competing narratives
One problem with using “clash” is that it obscures incidents in which Israeli police and security forces attack Palestinians who pose no threat to them.

Amnesty International, a human rights advocacy group, described the recent incident at the Al-Aqsa Mosque as one in which Israeli police “brutally attacked worshippers in and around the mosque and used violence that amounts to torture and other ill-treatment to break up gatherings.”

The word “clashes” does not convey this reality.

Using “clashes” also gives more credibility to the Israeli government version of the story than the Palestinian one. Israeli officials often accuse Palestinians of instigating violence, claiming that soldiers and police had to use lethal force to stave off Palestinian attacks. And that’s how these events are usually reported.

But Israeli human rights group B’Tselem’s database on Israeli and Palestinian fatalities shows that most of the roughly 10,000 Palestinians killed by Israel since 2000 did not “participate in hostilities” at the time they were killed.

We saw this attempt to shift the blame to Palestinians for Israeli violence in the killing of journalist Shireen Abu Akleh. According to her colleagues at the scene of her death, an Israeli military sniper deliberately shot and killed the veteran journalist with a live bullet to her right temple, even though she was wearing a “PRESS” flak jacket and helmet. One or more snipers also shot at Abu Akleh’s colleagues as they tried to rescue her, according to eyewitness accounts.

At first, Israeli Prime Minister Naftali Bennett said that “armed Palestinians shot in an inaccurate, indiscriminate and uncontrolled manner” at the time of her killing – implying that Palestinians could have shot Abu Akleh. Then, as evidence mounted disproving this account, Israeli officials changed course, saying that the source of the gunfire “cannot yet be determined.”

The New York Times initially reported that Abu Akleh “was shot as clashes between the Israeli military and Palestinian gunmen took place in the city.” Further down in the same story, we read that Palestinian journalist Ali Samudi, who was wounded in the same attack, said, “There were no armed Palestinians or resistance or even civilians in the area.” Yet this perspective is missing from the headline and opening paragraphs of the story.

A few days later, an analysis of available video footage by investigative journalism outlet Bellingcat concluded that the evidence “appears to support” eyewitnesses who said no militant activity was taking place and that the gunfire came from Israeli military snipers.

The New York Times has not updated or corrected its original story to reflect this new evidence.

It provides an example of why the use of “clash” has been widely criticized by Palestinian and Arab journalists. Indeed, the Arab and Middle Eastern Journalist Association in 2021 issued guidance for journalists, urging that they “avoid the word ‘clashes’ in favor of a more precise description.”

An incomplete picture
There is another problem with “clashes.” Limiting media attention to the Israeli-Palestinian conflict only when “clashes erupt” gives Western readers and viewers an incomplete picture. It ignores what B’Tselem describes as the “daily routine of overt or implicit state violence” that Palestinians living in the Occupied Territories face.

Without understanding the daily violence that Palestinians experience – as documented by groups such as Human Rights Watch and Amnesty International – it is harder for news consumers to fully comprehend why “clashes” take place in the first place.

But the way people get their news is changing, and with it so are Americans’ views on the Israeli-Palestinian conflict. This is especially true among younger Americans, who are less likely to receive their news from mainstream outlets.

U.S. journalists themselves are also working to change how outlets cover Israeli violence. Last year several of them – including reporters from The Boston Globe, the Los Angeles Times, The Washington Post and ABC News – issued an open letter calling on fellow journalists “to tell the full, contextualized truth without fear or favor, to recognize that obfuscating Israel’s oppression of Palestinians fails this industry’s own objectivity standards.” So far, over 500 journalists have signed on.

Accurate language in the reporting of Israeli-Palestinian violence is not only a concern for journalists’ credibility – it would also provide U.S. news consumers with a deeper understanding of the conditions on the ground and the deadly consequences.