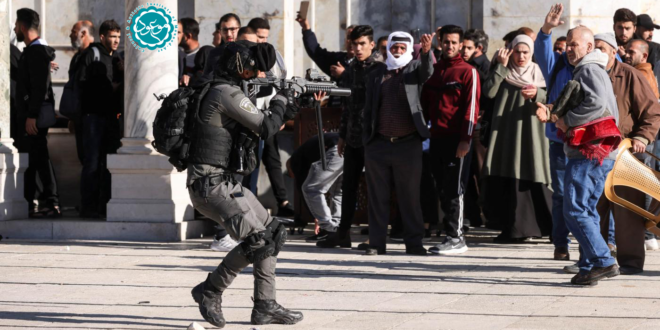 According to Mouood, quoting by MEE:

Israeli forces have attacked Palestinian worshippers inside al-Aqsa Mosque in occupied East Jerusalem during an early morning raid on Friday, wounding and arresting dozens of people.

Scores of worshippers were wounded as Israeli forces fired rubber-coated steel bullets, teargas and stun grenades inside the courtyards and prayer halls of the mosque.

The Palestine Red Crescent said 152 people were evacuated from the mosque and transferred to nearby hospitals, including many with upper body wounds. Al-Makassed hospital in East Jerusalem said they had received 40 wounded people from Al-Aqsa, two of them with critical injuries.

At least 400 people were arrested.

Shiekh Ekrima Sabri, the imam of Al-Aqsa, said the raid was intended to pave the way for Israeli settlers to storm the mosque during the Jewish Passover holiday, which starts later this evening.

“What happened today was a premeditated and orchestrated attack after the mobilisation of occupation forces to suppress the defenceless worshipers,” Sabri told Middle East Eye.
“They want to deter Muslims from coming to the mosque and allow Jewish intruders to storm Al-Aqsa,” the 82-year-old said, referring to plans by far-right Israeli activists to storm the mosque during Passover and slaughter animals on the premises as part of a religious sacrifice.

Such sacrifices inside al-Aqsa are unprecedented and will likely provoke the feelings of Muslims worldwide, who revere the Jerusalem site as the third holiest site in Islam.

“The [Passover] holiday will last for a week and therefore it is likely that they will try to storm again. Muslims must be wary and vigilant from any surprise raids and any treachery carried out by the occupation against us,” Sabri said.

How the raid unfolded

At the time, around 30,000 worshippers had arrived from Jerusalem and Palestinian communities inside Israel to join the prayer.

Police stormed the courtyards of the mosque from several gates, climbed the roof of the Qibli prayer hall – the main building on the site from where congregational prayers are led – and proceeded to fire at worshippers, preventing medics from accessing the wounded.

After one hour of continued attacks, Israeli forces surrounded hundreds of worshippers inside the silver-domed prayer hall before firing teargas and stun grenades inside the building.

“They beat everyone. Journalists, medics, elderly women – everyone that was in their way. They didn’t spare anyone,” eyewitness Fakhri Abu Diab told MEE.

After four hours, Israeli forces cleared all the mosque’s courtyards of almost all worshippers. They then moved in on worshippers inside the Qibli hall who refused to be forced out and locked the doors.

Dozens of Israeli officers infiltrated the hall from the back entrance next to the mosque’s clinic, which they also stormed, according to Abu Diab. They then fired directly at worshippers, who took cover behind the pillars, before police arrested over 400 of them.

Though Israel has repeatedly raided al-Aqsa and shot stun grenades and teargas into the Qibli hall, it is very rare for its forces to enter the 1,000-year-old domed building, particularly in great numbers. 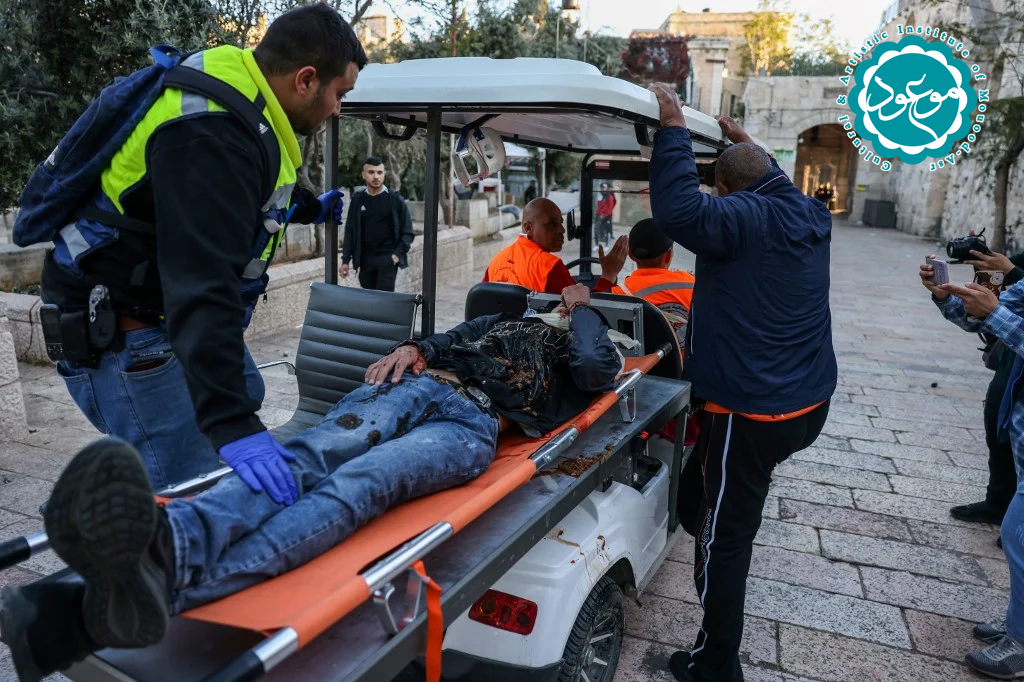 Journalists Muhammad Samreen and Rami al-Khateeb were among those wounded. At least one child was detained.

The buildings inside the complex were damaged in the attack, with some of its historical windows smashed by Israeli forces.

Shortly after the mosque was emptied, Israeli guards reopened the gates for tens of thousands of worshippers who came from the occupied West Bank and within Israel to participate in Friday prayer.

Relative calm returned to the city in the afternoon, but with settler plans to storm al-Aqsa next week, more violence is likely to follow, warned Abu Diab, who is an anti-demolition activist from Jerusalem.
“There’s no political horizon for Palestinians in Jerusalem and the West Bank where Israel has been building pressure against us for over a year,” he said.

“Attacking al-Aqsa will invoke emotions and reactions, and this pressure will eventually blow up.”

‘Barbaric aggression’
The Jordanian foreign ministry called on Israeli authorities to remove the police and special forces from the mosque courtyards as the attack unfolded.

Haitham Abu Al-Ful, the ministry’s spokesperson, warned against the consequences of this “dangerous escalation” and held Israeli authorities responsible for the safety of al-Aqsa Mosque and worshipers.

The Turkish foreign ministry said it was “deeply concerned” about the increasing tensions.

“We would like to emphasise once again the importance of not allowing provocations and threats against the status and spirituality of Masjid al-Aqsa, especially in this sensitive period,” the ministry added.
Nabil Abu Rudeineh, the official spokesperson for the Palestinian presidency, called the raid a “dangerous development and desecration of sanctities”.

“What is required is the immediate intervention of all international parties to stop this barbaric Israeli aggression on al-Aqsa Mosque, so that things do not get out of control,” Abu Rudeineh said.

Fawzi Barhoum, the spokesperson for the Palestinian movement Hamas, condemned what he called the “brutal attacks by the Israeli occupation”.

“Israel bears all the responsibility of its actions and the risks it takes against our Palestinian people and our people in Jerusalem who are fighting a real battle in defending al-Aqsa Mosque.”

The Joint List, a coalition of Palestinian lawmakers in the Israeli parliament, accused the government of Prime Minister Naftali Bennett of trying to “escalate its Judaization of Jerusalem”.

“The Palestinian people have never stopped the struggle against the occupation, and they will continue with greater force until the end of this occupation,” the coalition said in a statement. 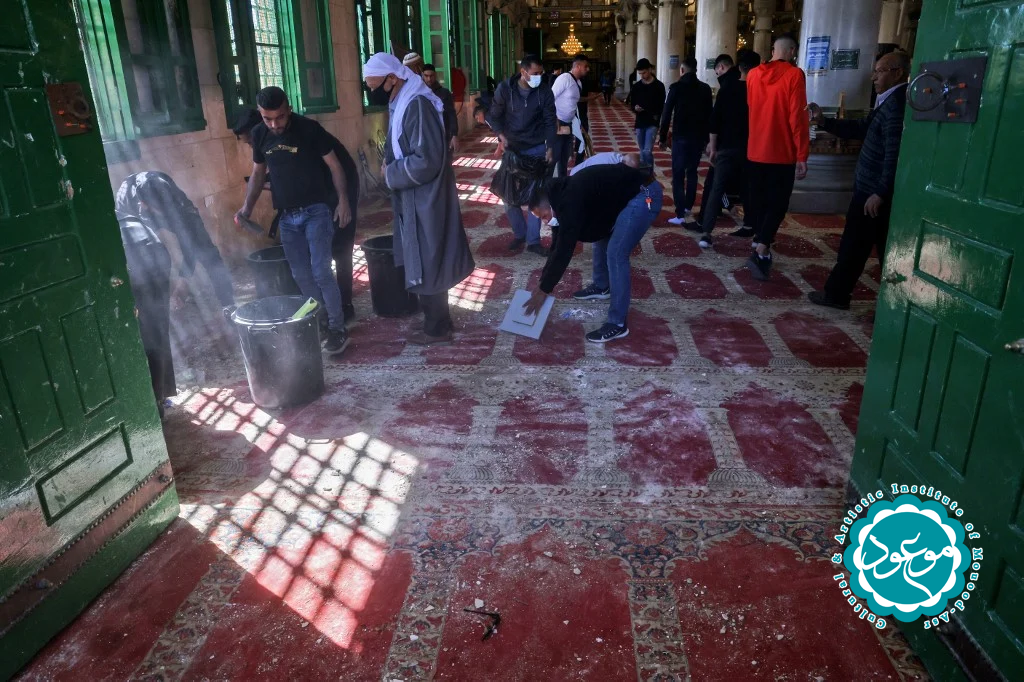 The raid came on the second Friday of Ramadan, the holiest month of the year for Muslims, when tens of thousands of worshippers flock to al-Aqsa to pray.

It also precedes the Jewish holiday of Passover, set to start today and last until 23 April, during which far-right Israeli nationalists have vowed to raid al-Aqsa Mosque and bring animals to slaughter inside its courtyard.

Such groups also advocate for the destruction of the mosque, where they believe two ancient Jewish temples once stood, to make way for a third temple.

Last year, multiple violent raids by Israeli forces inside al-Aqsa Mosque prompted widespread demonstrations across the occupied West Bank and by the Palestinian community inside Israel, leading to an 11-day war between Israel and armed groups in Gaza.

Israel’s large-scale military operation on the besieged Gaza Strip killed 256 Palestinians, including 66 children, according to the UN. In Israel, 13 people were killed by rockets launched from Gaza.

This article is available in French on Middle East Eye French edition.