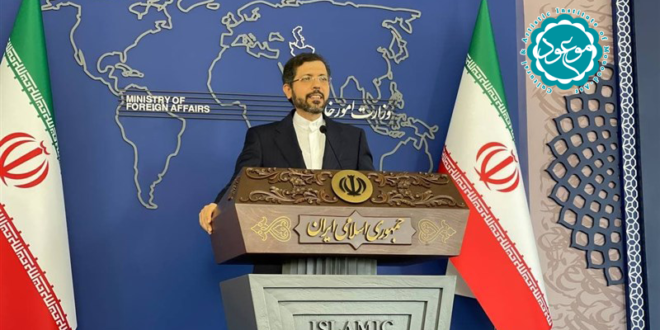 TEHRAN (Tasnim) – The spokesman for the Iranian Foreign Ministry condemned the “conference of evil” among the Israeli and American officials and foreign ministers from four Arab states as a betrayal of the cause for the liberation of Palestine.
Saeed Khatibzadeh’s remarks on Monday came after the foreign ministers of the United Arab Emirates, Bahrain and Morocco –three Arab countries that normalized relations with Israel in 2020– came together for a meeting with Israeli officials in the occupied Negev region, with US Secretary of State Antony Blinken and Egypt’s foreign minister, Sameh Shoukry, also in attendance.

Khatibzadeh referred to the meeting between those who betrayed the Palestinian cause and the usurpers of the holy city of al-Quds right in the land of Palestine, saying any attempt to normalize ties with the terrorist Zionists and the occupiers of al-Quds is a stab in the back of the oppressed Palestinian people and a gift to the child-killing Israeli regime for the continuation of the killing of people and occupation of Palestine.

He also said experience shows that the compromising and surrendering process will result in nothing but failure and the humiliation of its supporters and that Palestine will not be liberated in any way other than resistance by the Palestinian people and support from the Islamic governments and nations.

Khatibzadeh then warned against the seditious moves and shenanigans on the part of the Zionist regime in the region, the Iranian Foreign Ministry reported.

He finally declared Iran’s readiness to work with the regional countries and expand bilateral ties with them to counter the US-Zionist conspiracy that seeks to cause division in West Asia and destabilize the region.

Top diplomats from the United Arab Emirates, Morocco, Egypt, Bahrain, the United States, and Israel wrapped up the two-day meeting in the Negev desert on Monday with the purpose of pressing ahead with a US-brokered normalization of relations between the Arab states and the Israeli regime.

Palestinian Prime Minister Mohammad Shtayyeh on Monday condemned the meeting in the occupied Negev, saying holding such meetings while Tel Aviv continues its occupation is just an “illusion.”

Previous Halt to Saudi-Led Coalition Attacks Meaningless without End to Siege on Yemen: Ansarullah Official
Next Next Battle with Israel Will ‘Open Up Gates of Hell’, Hamas Warns