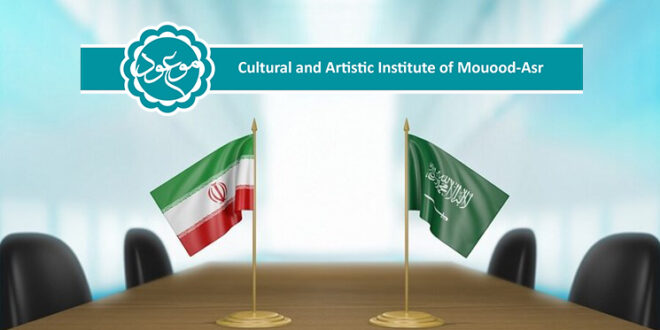 According to Mouood, quotes by Haaretz:

If the talks between Iran and Saudi Arabia would end in reconciliation, the rest of the Arab world could swiftly follow suit. The Middle East would look like a very different place – and so would Israel’s place within it.

Iranian Foreign Minister Hossein Amirabdollahian returned from his visit to Syria, Egypt and Russia with good news: Talks between Saudi Arabia and Iran had gone “a good distance,” he said. Foreign Ministry spokesman Saeed Khatibzadeh was more generous with details, saying the talks had proceeded “without interruption” and had focused on ties between Iran and countries in the region, mainly the Persian Gulf States. The war in Yemen was also discussed.

Riyadh and Tehran have already signed a number of agreements, Khatibzadeh said. According to diplomatic sources who spoke with Arab journalists, consulates are expected to open in the two countries soon. A full normalization agreement is expected within weeks, with embassy openings to follow.

If the negotiations between the House of Saud and the Islamic Republic of Iran do result in an agreement and normalization, this will be the final chapter of the anti-Iranian coalition. Israel relied heavily on this coalition, of which it considered itself an unofficial member, to the point where the common denominator between Israel and Saudi Arabia led to hope of a renewal of Saudi ties with Israel.

Saudi-Iran ties might remove the obstacles to a direct channel between all Arab states and Iran. Evidence of this can already be seen in statements by Jordanian Foreign Minister Ayman Safadi, who in a phone call with his Iranian counterpart last week said: “Good relations with Iran are an important interest of Jordan’s.”

Meetings between Saudi Arabia and Iran began secretly in April. There have been three rounds of talks, the last of which was in late September, after President Ebrahim Raisi took office in Tehran. Another round is expected in a few days. Even during his presidential campaign, on instructions from Iranian’s supreme leader Ayatollah Ali Khamenei, Raisi said his foreign policy would focus on mending Iran’s relations with its neighbors, especially Saudi Arabia. At the same time, in his speech to the United Nations General Assembly last month, Saudi Arabia’s King Salman bin Abdul-Aziz Al Saud Salman said Riyadh aspired to good relations with Iran. These relations were severed in 2016 after protesters attacked the Saudi Arabian Embassy in Tehran and the consulate in Mashhad in response to the execution in Saudi Arabia of the prominent Shi’ite cleric and activist Sheikh Nimr al-Nimr.

Ties continued to deteriorate as the war in Yemen progressed between government forces backed by Saudi Arabia and the United Arab Emirates, and the Houthis, who are supported and financed by the Iranians. The Saudi desire to end the war with a sweeping victory crashed and burned in the face of the strength of the Houthis as they took over large parts of the country, including the capital Sanaa. Saudi Arabia, which launched the war as part of its anti-Iran strategy, found itself within four years on a collision course not only with the Houthis, who began to fire missiles at Saudi strategic targets, but also with the U.S. Congress. The latter demanded that Saudi Arabia be compelled to stop the war, which more than 100,000 people have been killed, and which has become what the United Nations secretary-general called the worst manmade humanitarian disaster.

Late in his term U.S. President Donald Trump, who still supported Saudi Arabia, had to back down in the face of Congress and demand that Saudi Arabia conduct direct talks with the Houthis. When Joe Biden succeeded him, in January, the Saudis began to revisit their regional policies. Salman promoted ties with Iran in the wake of the complete break between Crown Prince Mohammed bin Salman and Biden over the murder of the Saudi Arabian journalist Jamal Khashoggi and Biden’s pressures to stop the sale of American weapons to Saudi Arabia because of their use in the war in Yemen, as well as Biden’s renewal of negotiations with Iran over its nuclear program.

Saudi pundits have explained that the kingdom realized that it could no longer depend on the United States and it should diversify its strategic relations and reposition itself in the Middle East. A series of foreign-policy failures, including an attempt to cause Lebanese Prime Minister Rafik Hariri to resign, which ended in fiasco; an inability to influence the war in Syria; the lack of a clear outcome in the Yemen war despite Saudi Arabia’s military superiority and the departure of the United Arab Emirates from the arena, as well as Trump’s refusal to help Riyadh against Tehran after the attack on its oil installations, made it clear to the Saudis that dialogue with Iran was essential to preventing their country from becoming a permanent battlefield that would hurt the crown prince’s grandiose economic plans for the kingdom.

The closer the nuclear talks come to an agreement, the more Saudi Arabia will have to examine together with Iran the impact of such an agreement on the oil market. The reentry of Iran to the market could rob Saudi Arabia of veteran customers, bring down prices and hurt the kingdom’s main source of revenue. Saudi Arabia’s worries may be exaggerated, because China is expected to purchase most of Iran’s oil according to a strategic agreement China signed with Iran in March. However, Saudi Arabia has no guarantee that Iran won’t seek to retain important clients like India, Pakistan, South Korea and Japan. Iran, for its part, has a great interest in renewing ties with Saudi Arabia, because such an agreement would recognize, even informally, its special status vis-a-vis Lebanon, Syria, Yemen and Iraq. Thus it will be open to the Arab Middle East, most of which has so far been leery, under heavy U.S. pressure, of friendlier ties with Tehran.

The renewal of close ties between Iran and Saudi Arabia is ostensibly a major blow to Israel. Not only is there a fundamental disagreement between Prime Minister Naftali Bennett and Biden regarding Iran’s nuclear program and the deal Washington seeks, but the bubble of the Arab anti-Iranian coalition – one that former Prime Minister Benjamin Netanyahu inflated with hot air – is about to burst. Saudi planes would not have joined a coordinated assault on Iran with Israel without U.S. approval, and even during the Trump administration the U.S. made clear that it was headed for diplomacy, not war.

The UAE signed cooperation agreements with Iran two years ago, which did not prevent it from signing a peace agreement with Israel. Qatar is a veteran business partner of Iran. Other members of the coalition, such as Egypt and Jordan, are mainly onlookers. The Arab states, especially Saudi Arabia, that sought to heighten their status in Washington by marketing their common struggle with Iran, could in Trump’s day rely on Israel’s lobbying, albeit not very successful. Now they realize the battle against Iran is no longer a valuable commodity and Israel is a go-between that charges commission but doesn’t deliver the goods.