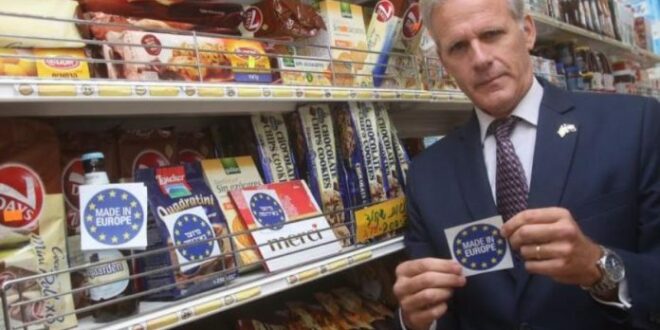 Citizens in the EU will soon be able to vote with their wallets against Israel’s imperialist policies.

The European Commission has “adopted the Interpretative Notice on indication of origin of goods from the territories occupied by Israel since June 1967.”

The Israeli Foreign Ministry has expressed concerns about the move:

“Whereas the upcoming labeling guidelines are presented by the EU as a purely ‘technical measure’ designed to protect European consumers, there is no doubt that the main purpose of the measure is to exert political pressure upon Israel,”

“These measures are discriminatory in nature. It is intolerable that Israel is the only country that has been singled out by the EU for such a policy, despite the fact that there are over 200 disputed territories worldwide.”

Perhaps if Israel acted in a less obviously illegal and aggressive manner, it would not find itself being ‘singled out’.

US State Department Deputy spokesman Mark Toner had this to say:

“Israel continues to expand settlement activity. It should not come as a surprise that some in the international community seek to limit commercial ties to the settlements. This underscores the urgent need for Israel to change its policies with regard to settlements.”

The actions of the Israeli government are, at long last, apparently becoming repugnant to the international community. The advent of modern technology has meant Israeli crimes are more widely available for the world to see, so much so that they simply cannot be ignored.

Share
Previous Abdel Fattah al-Sisi meets with Bibi in New York
Next Analysis: End of war in Syria not in Washington’s interest