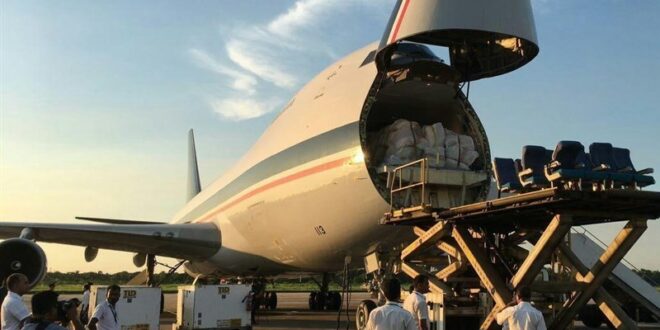 Iranian aid handed out to Rohingyas in Bangladesh border with Myanmar

Forty tons of Iran’s relief aid has reached the Bangladesh border with Myanmar, where tens of thousands of Rohingya Muslims are stranded after fleeing what has been called “a textbook example of ethnic cleansing” by the UN.

The head of the Iranian Red Crescent Society, Morteza Salimi, who was on board the flight to the southeastern city of Chittagong, Bangladesh, announced before the flight that Iran is ready to send another 160 tons of aid for the fleeing Rohingya minority, and is also prepared to construct emergency camps for the refugees on the Bangladesh’s border with Myanmar.

Also on board the humanitarian aircraft operated my Iran’s Army was Ebrahim Rahimpour, the deputy for Asia & Pacific affairs at Iran’s Foreign Ministry. Rahimpour told reporters before the flight that due to the nature of the flight route, Iran’s embassy in Bangladesh has made efforts to facilitate the delivery of the goods.

He also expressed hope that Iran’s assistance would continue and that easier routes via maritime transport would be added for aid shipments to those fleeing to Bangladesh from Myanmar’s atrocities.

According to latest estimates, about 391,000 Rohingya refugees have crossed into Bangladesh since violence erupted three weeks ago, making it one of the fastest growing refugee crises in recent years.

UNICEF has warned that more than half the nearly 400,000 Rohingya refugees who fled from Myanmar are children in dire condition.

About 240,000 children, of whom 36,000 are less than a year old and 92,000 are under five years old, are living in squalid conditions where they are vulnerable to the spread of disease, the UN children’s agency said on Friday. There are also about 52,000 pregnant and lactating women among the refugees.

Conditions are deteriorating in Bangladesh’s border town of Cox’s Bazar, where the constant influx has increased pressure on already-overcrowded Rohingya camps with 300,000 members of the minority from earlier refugee waves.

The volatile Rakhine, located in the northwest of Myanmar, has been the scene of communal violence since 2012. Many of the Muslims have lost their lives while tens of thousands have been displaced as a result of attacks by Buddhists. The refugees largely live in camps in dire conditions.

Since October 2016, Myanmar’s government has laid a siege to the western state of Rakhine, where the Rohingya Muslims are concentrated. There, horrific violence, including killing, rape and torching property, has been taking place against the minority Muslims, according to reports and eyewitnesses.

Aid agencies are overwhelmed by the sheer size of the exodus.

Myanmar’s leader Aung San Suu Kyi is under fire by the international community and rights groups for allowing the government troops and the Buddhist mobs to further impose a violent clampdown on the desperate minority.

Suu Kyi, who was awarded the Nobel Peace Prize in 1991, is also heavily criticized by a number of her fellow Nobel laureates, including Malala Yousafzai and Desmond Tutu, for allowing such atrocities against the Rohingya.

Myanmar’s government denies full citizenship to the Rohingya, branding them illegal immigrants from Bangladesh. Dhaka, in turn, regards the desperate refugees as Myanmarese and harshly pushes them back. The Rohingya, however, track their ancestors many generations back in Myanmar.