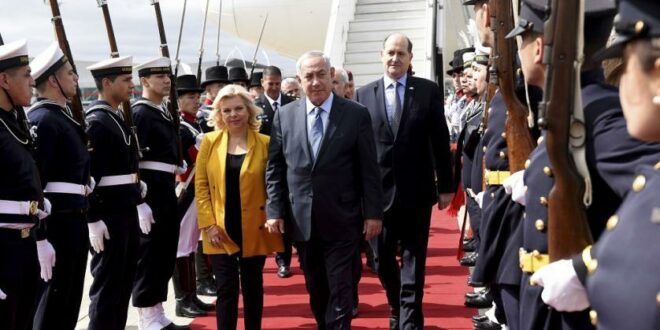 People protested in Argentina on Monday against the visit of Israeli Prime Minister Benjamin Netanyahu to the Latin American country.

Condemning his policy against Palestinians, the protesters compared the Israeli leader to Adolf Hitler.

Israeli media said that Netanyahu headed on his South American tour to escape corruption accusations back home, while the premier deemed the trip as “historic.”

He had arrived in Argentina on Monday as part of a tour of Latin America that sees him visit Colombia and Mexico. He will conclude it in New York where he is set to attend the United Nations General Assembly.

Activists welcomed Netanyahu in Argentina with protests, putting up posters throughout Buenos Aires depicting him as Hitler and dressed up in Nazi uniform. Other posters accused him of committing genocide and ethnic cleansing against the Palestinian people.

Some held up banners accusing him of committing crimes against humanity and of murdering the Palestinian people. Another banner called for expelling Zionism from Palestine.

The protests prompted the police to intervene to prevent any clashes and tensions.

Netanyahu said that his tour of Latin America is aimed at bolstering economic, security and technological ties between it and Israel.