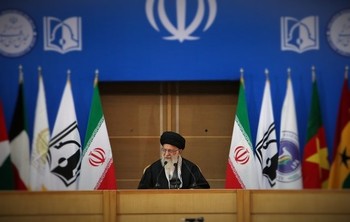 The Leader of the Islamic Revolution, Ayatollah Seyyed Ali Khamenei, in an address to the Sixth International Conference in Support of the Palestinian Intifada in Tehran says If the Resistance had not brought the Zionist regime to its knees, we would now be witness to its transgressions against other regional countries – from Egypt to Jordan, from Iraq, the Persian Gulf region to other areas.

The full text of the leader’s address is as follows:

In the Name of Allah, the Beneficent, the Merciful

All praise is due to Allah, the Lord of the Worlds, and Allah’s peace and greetings be upon the Master of All Peoples, Muhammad al-Mustafa, and upon his immaculate household and chosen companions.

In the beginning, I deem it necessary to welcome all you dear guests, the honorable heads of Islamic organizations, the leaders of various Palestinian groups, the intellectuals, scholars and outstanding personalities of the world of Islam and other personalities who fight for freedom. I welcome you for your presence in this valuable conference.

The sorrowful story of Palestine and the excruciating sadness felt because of the oppression against this patient, enduring and resistant nation, truly distresses any individual who seeks freedom, truth and justice and it thrusts an agonizing pain and suffering upon one’s heart.

The history of Palestine is full of ups and downs, marked by the cruel occupation of that region, the rendering of millions of individuals homeless, and the courageous resistance of those heroic people. An intelligent quest in history shows that no people in any era of history have ever been subject to such pain, suffering and cruelty. It has never been witnessed that a country is completely occupied in a supra-regional plot, that a people are driven away from their home and their country and that another group of people from remote areas in the world are brought there in order to replace that nation. It has never been witnessed that a real entity is ignored and that a fake entity takes its place.

Your conference is being held under one of the most difficult circumstances in the world and in the region. These days, our region – which has always supported the people of Palestine in their fight against a global plot – is undergoing numerous upheavals and crises. The existing crises in several Islamic countries in the region have caused the support for the issue of Palestine and the holy ideal of Quds’ freedom to be undermined. Attention to the result of these crises helps us to understand which powers benefit from the existence of these crises.

Those who created the Zionist regime in the region with the purpose of hampering the stability, solidity and progress of the region through imposing a long-term conflict are behind the seditions that exist in the present time as well. These are seditions that have culminated in the capabilities of regional nations being used to foil one another because of engagement in futile and meaningless conflicts.

When all these capabilities are ruined, the ground will be prepared for strengthening the usurping Zionist regime on a daily basis. Amid all these, we are witness to the endeavors of well-intentioned and wise personalities in the Islamic Ummah. They are diligently trying to resolve these differences. But unfortunately, the complicated plots of the enemy have managed to impose civil wars on nations by benefiting from the negligence of some governments. These plots have managed to pit nations against one another and to counter the effect of the endeavors that well-intentioned personalities in the Islamic Ummah have made.

What is significant in this regard is the effort to weaken the position of the issue of Palestine and to give it the lowest priority. Despite the differences that exist among Islamic countries – some of these differences are natural, some originate from the enemy’s plot and the rest are because of negligence – the issue of Palestine can and should be the pivot of unity for all Islamic countries. One of the achievements of this valuable conference is announcing the first priority of the world of Islam and freedom fighters all over the world, which is the issue of Palestine and the creation of an atmosphere of harmony and unanimity with the purpose of achieving the lofty goal of supporting the people of Palestine and their truthful and justice-oriented fight. The significance of offering political support to the people of Palestine should never be neglected. This issue has a special priority in today’s world. Even if Muslim and freedom-seeking nations have different viewpoints and opinions, they can gather together with one goal which is Palestine and the necessity to liberate it. With the emergence of signs of the collapse in the Zionist regime and the weakness that has dominated its main allies – in particular the United States of America – it is witnessed that the global environment is gradually moving towards confronting the hostile, illegal and inhuman activities of the Zionist regime. Of course, the global community and regional countries have not yet managed to carry out their responsibilities towards this humanitarian matter.

Suppressing the people of Palestine in a brutal manner, arresting numerous individuals, looting and murdering people, occupying the lands that belong to the Palestinian nation and building settlements in them, making an effort to change the appearance and identity of the Holy City of Quds, Masjid al-Aqsa and other holy Islamic and Christian places, violating the basic rights of citizens and many other abuses continue to exist. These acts enjoy the all-out support of the United States of America and some other western governments and unfortunately, they do not receive a proper response from the world.

The people of Palestine are proud that Allah the Exalted has given them a great favor by helping them to shoulder the great responsibility of defending this Holy Land and Masjid al-Aqsa. The people of Palestine have no option other than keeping the flames of fighting alight by relying on Allah the Exalted and by relying on their innate capabilities, as they have genuinely done so until today. The intifada that has begun for the third time in the occupied lands, is subject to more suppression than the previous two, but it is still moving forward in a bright and hopeful manner. And by Allah’s permission, we will see that this intifada will begin a very important chapter in the history of fighting and that it will inflict another defeat on that usurping regime.

From the beginning, this cancerous tumor has been developing in several phases until it turned into the current disaster. The cure for this tumor should be developed in phases as well. Until today, several intifadas and a constant and continuous resistance have managed to achieve very important phased goals. The Palestinian intifada continues to gallop forward in a thunderous manner so that it can achieve its other goals until the complete liberation of Palestine.

The great people of Palestine – who shoulder the heavy burden of confronting global Zionism and its bullying supporters – have given an opportunity to all claimants to put their claims to the test and they have done so in a patient yet vigorous and solid manner. The day when “compromise proposals” were brought up seriously with the false excuse of realism and the necessity to accept minimum rights in order to prevent those rights from being violated, the people of Palestine and all those orientations which were already aware of the inaccuracy of that viewpoint gave it an opportunity. Of course, from the beginning, the Islamic Republic of Iran insisted on the incorrectness of compromise strategies and warned of their harmful effects and heavy damages. The opportunity that was given to the compromise procedure brought about destructive effects on the path of resistance and the fighting of the Palestinian nation, but the only benefit that it had was to prove the inaccuracy of the so-called “realism” outlook in practice.