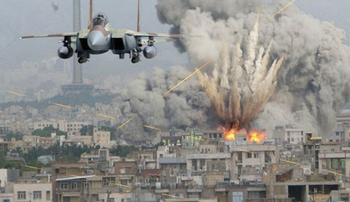 Analysis: What is role of US-led coalition in Syria, Iraq?

In Summer 2014, the US formed the anti-ISIS international military coalition in a bid to take a leading role in the Syrian and Iraqi developments. The measure was taken at a time when the terrorist organizations, particularly ISIS, had seized control of vast areas of Iraq’s and Syria’s territories through launching an array of heinously violent operations across the two countries.

As part of plans for role playing, Washington gathered together 60 countries under a counter-terrorist bloc, leading renewed military operations in West Asia. But gradually the process of the US-led coalition’s operations made it clear that participation of the 60 nations in the so-called alliance was simply a cover for the US to demonstrate its power, because in practice except for some Arab and European countries others have no hand in the military campaign, and in fact the leadership is at the hands of Pentagon sans any mandate from the UN Security Council.

Up to now, it has been over two years since the US-crafted coalition launched its first airstrikes in Syria and Iraq. In this period, it carried out over 16,000 air raids on the positions of the terrorists in two countries. No reports yet appeared to release accurate figures on the civilian and terrorist losses as a result of the aerial assaults. While the American officials say 173 civilians up to now were killed by the bombing campaign, the Airwar.com, a journalist-based transparency group based in Britain, has put the number at nearly 1,500.

The overarching issue in this highly costly bombing campaign is the scale of its efficiency and influence in the course of counter-terrorist battle in the region. The US Department of Defense has released a report, saying that the international anti-ISIS alliance in Syria and Iraq costs its members a total sum of $8.3 million per day.

Todd Harrison, a researcher at the US Center for Strategic and Budgetary Assessment, notes that this war can cost between $2.4 and $3.8 billion per year. Harrison believes that once the coalition decides to broaden range of strikes against ISIS, the expenses could jump to between $6.8 billion. This comes as the unmanned spying aircraft of the international campaign take between $1,000 for MQ-1 Predator drones and $7,000 for MQ-9 Reaper drones per hour.

Notwithstanding the resounding military expenses as well as civilian deaths and displacements, the alliance has failed to make any considerable gains. Furthermore, it helped no areas be taken back from the terrorists’ grasp and dealt no working blows to the terrorism in the two war-torn countries.

But this scenario witnessed changes after Russia stepped militarily in the Syrian crisis in September 2015. Provided by accurate planning and certain targets, the Russian fighter jets launched airstrikes against the terrorists’ sites in support of the Syrian army. By offering air cover to Syria’s regular and popular forces, the Russian forces even helped speed up pushing back the terrorists and reclaiming the areas held by them.

Meanwhile, the reaction by the coalition members to Russia’s campaign came in form of emphasis on saving civilian lives and holding a ceasefire. Actually, the strong Russian intervention ended the time of sham anti-terror military campaign, an issue apparently raised concerns of the pro-terrorist camp.

However, despite fast-moving advances made by the Syrian armed forces in the battleground, a truce as a political way to put an end to the crisis was reached and agreed upon, though the evidences laid bare the fact that pro-terror sides like Saudi Arabia and Turkey were seizing the opportunity provided by the cessation of hostility to re-equip the anti-Damascus militants. At the end of the road, the militants’ assaults breached the fragile ceasefire deal.

This situation in Iraq was also likewise. Two years have passed since the US-led coalition commenced its air assaults but proved unfruitful in pushing the ISIS terrorists back from the captured areas. Finally, Baghdad organized its army and authorized formation of the Public Mobilization Forces (PMF), a voluntary force, and moved to defeat the terrorists. The result was liberation of Fallujah, Al Anbar and pushing ahead toward Mosul, the last stronghold of ISIS in the country.

The remarkable point amid deadly anti-terror wars is the Americans’ struggle to prolong the instability in West Asia region. While the Prime Minister Haider al-Abadi of Iraq predicted a three-month period for ending the Mosul battle and recapturing the city, Lieutenant General Stephen Townsend, the commander of the international coalition, said that the fighting against the terror organization in the northern Iraqi city could take two years to end.

But liberation of Aleppo proved that beating ISIS does not take multi-billion dollar expenses in a two-year period of time. The requirement for obliteration of the terrorists is a real and serious determination.

By an examination of the coalition forces’ performance we can come up with the fact that they hold no plan to destroy ISIS in the region. Instead, within this two-year period, the members of the coalition fitted out the terrorists with equipment.

Recently, as US-Turkey rifts saw a surge, Turkish President Recep Tayyip Erdogan unleashed new revelations, saying that the White House is arming the terrorists of the region. A proof for this aiding is terrorists’ access in Khan Tuman of northern Syria to armored wares, a help that contributed to the village fall to terrorists several months ago.

On the other side, the international alliance under Washington’s leadership mostly destroys the vital and infrastructural facilities in Syria and Iraq instead of targeting the major sites of the terrorists. Last year, for instance, a British aircraft bombed the oil fields and refineries of Syria under the excuse of cutting off the ISIS’ oil incomes in the country.

In Iraq, on the other side, during the Ramadi recapture operation beside the city’s infrastructures sustained a high degree of demolition, among them was a total of 700 houses that were bombed to rubble by the American and British jets.

On the opposite side stand the regular armed forces as well as popular units of Syria and Iraq that try to in shortest possible time without damages to the vital facilities pave the way for their own progresses. They made triumphs with a modest amount of military training and arms supplies. This came while the US breached terms of its security agreement with Iraq according to which Washington should help Baghdad when the need arises, and so the latter had to head to Moscow for military provision.

So the outcomes of over-two-year military spending and destroying the Iraqi and Syrian cities by the coalition’s planes compared to the Syrian and Iraqi armies’ operations for liberation of Aleppo, Palmyra, Hama, Fallujah, Ramadi, and Jarf Al Sakhar and breaking siege of Amerli showed that the White House under the cover of anti-terror alliance was only seeking to return to the region rather than eradicating terrorism. That is why it accompanied its every military step with a storm of media propaganda while practically making no gains in battling ISIS either in Iraq or in Syria.

Moreover, many analysts assert that the US and its coalition seek interests behind its intervention in Syria, and under the counter beef up military aids for the anti-Syrian terrorist groups labeled by Washington as moderate opposition groups. This was a point of consensus in the Jeddah “Friends of Syria” conference.

The conclusion is that only the domestic forces in the terror-hit countries can determine the situation on the ground. Otherwise– and with setting heart on the Western coalition’s backing– a prediction of Charles Lister, a top figure at the US-based Middle East Institute think tank, can come true. Lister in one of his latest comments on Syria and Iraq said that the US should prefigure a multi-decade war in the region. If Washington expects full ISIS obliteration, then, in fact, the US is fighting a war it has already lost, he notes.

Share
Previous If not in Syria, we should have fought Takfiris in Iran: Leader
Next Israel sets record for killing Palestinian kids in 2016