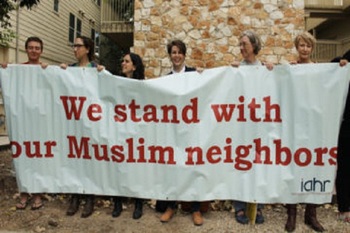 A crowd of 300 gathered Friday outside a mosque in Austin, US state of Texas, to show solidarity with Muslim Americans in light of a spate of Islamophobic hate crimes following the US presidential election.

The protesters, organized by the newly formed activist group Muslim Solidarity ATX, held signs outside the Nueces Mosque reading “We love our Muslim Neighbors” as worshippers gathered for Friday prayers.

“I just came here like every Friday; I had no idea this was happening,” said Mayce Sadi, a biochemistry student and mosque member. “It’s amazing all these people took the time to come here and show support.”

The mosque’s imam, Mohamed-Umer Esmail, addressed the crowd with a political message after prayers. “As long as we have wonderful people like you, America will always be great,” he said. “Together, we can get through hopefully only four years of President Trump.”

The Islamic Center of Greater Austin estimates that more than 10,000 Muslims live in the city. Esmail told the Observer he had heard reports of women being verbally harassed for wearing the hijab and of drivers intentionally swerving toward Muslim bicyclists.

Sadi confirmed the tense mood among the community. “What scares us is not that Trump is a racist,” she said. “It’s that so many people supported him, and you don’t know if they’re on the street or in your class with you.”