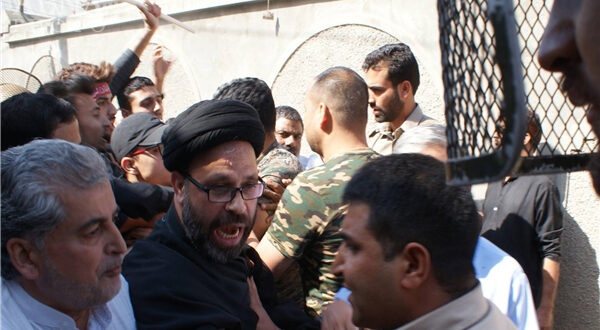 Indian Police on Wednesday detained scores of Shiite mourners at Srinagar’s BSNL exchange after they peacefully managed to reach the civil lines area of Srinagar.

Local sources informed that scores of mourners were detained after they managed to reach Moulana Azad Road despite restrictions imposed by the state administration in Srinagar areas.

They informed that the mourners had arrived in a private vehicle from central Kashmir’s district Budgam and were raising pro-freedom slogans when they were detained.

The mourners were planning to reach Imam Bada Zadibal from where the biggest Muharram procession was scheduled to be held.

Meanwhile, police fired teargas shell to break up another peaceful procession near TRC in the city.

Meanwhile, a huge Muharram procession was carried out in Gulshan Bagh Bota Kadal to Zadibal area in which thousands of Shiite Muslims participated and remembered sacrifices of Karbala martyrs.

It is worth to mention here that on 10th day of Muharram – known as Day-of-Ashura –Imam Hussain (A) and his companions were martyred by tyrant Yazid about 1400 years ago in Karbala, Iraq.

Meanwhile, some participants during the peaceful procession were holding placards displaying: “we want justice”, “stop killings in Kashmir”.

Notably, Police had said that it will impose restrictions in “sensitive” areas of the city in view of the 10th Muharram procession.

Pertinently, at least a dozen of Shiite mourners were injured after forces used tear gas canisters to foil the peaceful Muharram procession in Baba Demb area of old city here.

Scores of Muharram procession were foiled by the authorities from past three day that include in Batamaloo, Chattabal and other areas while scores of mourners were also detained in these areas who were later released.