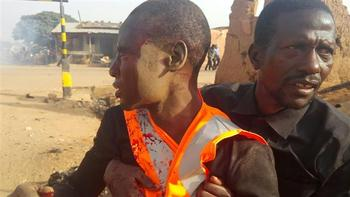 Kaduna Governor demands arrest of attackers of Shia in Nigeria

The governor cautioned security officers while urging them to immediately arrest the irate youths who took part in the act.

Nine people were martyred in the attack in the state and El-Rufai says those who participated in it must be brought to justice just as he warned against actions that would cause the death of anyone in the state.

The attack in that part of Kaduna was said to have been carried out by irate youths from the state, however our sources informed that thugs with the support of police, demolished the Shia’s Islamic school in the area.

Premium Times reports that the spokesperson of the Shia group, Ibrahim Musa, had been arrested on the order of the Kaduna state government.

A statement signed by Samuel Aruwan, the spokesperson El-Rufai, said the governor was challenging the security agents to uphold law and order as well as investigate and arrest anyone found culpable in the act.

Nigerian thugs and Police opened fire on mourners of Imam Hussein in Center of the Islamic movement in Kaduna Nigeria, after the successful procession the security operatives went to zango road, tudun wada kaduna were the annual Ashura Mourning Gatherings take place daily they open fire.