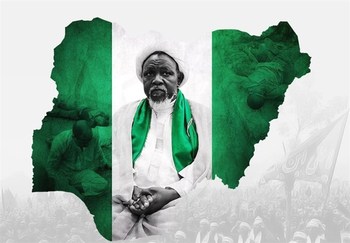 The Nigerian Government on Friday gave a reason for the continued detention of Ibrahim El-Zakzaky, the leader of the Islamic Movement of Nigeria, IMN.

Speaking during a press briefing at the UN secretariat in New York, the Minister of Foreign Affairs, Geoffrey Onyeama, said the Muhammadu Buhari administration is not willing to disrupt the process of inquiry initiated by the Kaduna State government and has decided to allow the full process of the law prevail in the case.

The Kaduna State government recently released the report of a panel its set up to investigate the clash which led to the massacre of over 300 members (some reports say more than 700) of the Islamic Movement by Nigerian soldiers.

Mr. Onyeama, responding to a question, said the federal government would study the report.

“Government will study it, the Attorney General will look at the report and whatever measure needs to be taken will be taken,” he said in New York.

Over 700 peaceful members of the IMN were brutally killed between December 12 and 14 after the Nigerian army accused them just for blocking a road which the Chief of Army Staff, Tukur Buratai wanted to cross it.

Hundreds of members of the movement including its leader, Mr. El-Zakzaky, and his wife, were subsequently arrested.

For several weeks, Mr. El-Zakzaky was prevented from seeing anyone include his doctors, lawyers or family members.

On April 5, the Islamic cleric’s lawyer who was finally allowed to see him, confirmed public rumours that the army had damaged Mr. Zakzaky’s eye.

“As a result of the brutal attack, Sheikh Zakzaky lost his left eye while doctors are currently battling to save the right one,” the lawyer, Femi Falana, said.

On Friday, Mr. Onyeama claimed that the IMN leader was getting the required medical attention.

“He (Mr. El-Zakzaky) is getting all the medical attention he requires. This I can say with certainty,” the minister claimed.

A Federal High Court in Abuja in July denied an application for bail by Mr. El-Zakzaky.

According to the court, Mr. El-Zakzaky and his lawyers failed to seek the leave of the court to hear the application during the vacation period.

Massacre of Islamic Movement members, mostly Shiite Muslims, has been condemned by local and international organizations around the world.