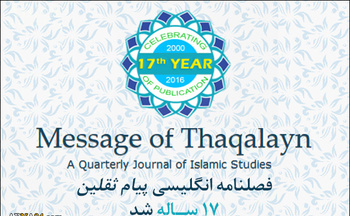 65th No. of magazine “Message of thaqalayn” published for seventeen years

The Sixty-fourth issue of the Journal of “message of Thaqalayn” in English was published.

With the release of the new issue of “Message of Thaqalayn” in English, the magazine went in the seventeenth year of publication.

The sixty-fifth number of the serial number of this magazine is the first issue of the seventeenth year (spring 2016).

Translated titles and names of authors of articles in this issue are as follows:

The Globe Before and After the Advent of Imam Mahdi (aj), Part IV
Mohammad Ali Shomali

Qur’anic Strategy in Its Own Preservation, Part II
Fatemah Meghji

The Core of Action: Sincerity of Intention
Tawus Raja

World Assembly of Ahl al-Bayt (AS) and its affiliated centers, has published more than 1,700 books and hundreds of journals in more than 55 languages and has distributed in the world.