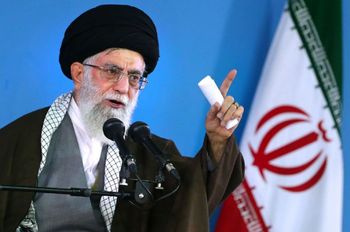 Imam Khamenei Warns US Over Nuclear Deal Violation ‘If They Tear Up JCPOA, We Will Burn It’

Leader of the Islamic Revolution, Ayatollah Seyyed Ali Khamenei, has issued a stern warning to the United States over any move to violate a nuclear deal signed between Iran and six major world powers.

Speaking in Tehran on Tuesday during a meeting with the Establishment’s high-ranking officials in the army and government on Tuesday evening in Imam Khomeini (RA) husseiniyeh on the occasion of Islamic holy month of Ramadan, Ayatollah Khamenei pointed to the threats by some US presidential hopefuls to scrap last year’s nuclear agreement, known as the Joint Comprehensive Plan of Action (JCPOA), between Iran and the P5+1 group of countries, saying the Islamic Republic will strongly respond to any such move.

Leader focused upon the acts of sabotage either in JCPOA or elsewhere embarked on by the enemies who Ayatollah Khamenei believed were all seeking to undermine the capabilities of the country; “In response to these acts of sabotage, I have emphasized upon strengthening the country; only then could we claim that we have prepared welfare of the nation,” he told the meeting.

“On JCPOA, both proponents and opponents have engaged in a frenetic activity of opposing or defending the deal; I directly address foreign parties to the deal and not our negotiators on this issue where loopholes have been abused by the enemies to render the JCPOA virtually useless for our side; we will remain committed to the deal; however, much strong response should be awaited by the other side should they violate its provisions,” the Leader emphasized, taking serious rhetoric quite unusually at least recently and unprecedented in all his addresses touching the nuclear deal.

Ayatollah Khamenei criticized that the other side had systematically failed to attend one of its major commitments, that is, removing crippling sanctions; “our banks still suffer restrictions they suffered before; our oil tankers are still denied international insurance policies on place for other oil tankers; our oil income has failed to find a way to welfare of our people; in turn, we have been committed to our obligations in abandoning enrichment in Arak and Fordow; however, the Americans are yet to show traces of commitment to obligations,” the Leader objected.

Turning to the contributing factors of the system’s strength, Leader highlighted the ‘Islamic element’ as an issue of great importance which should be improved in the face of all propaganda systematically targeting Iran’s young cohort; the second contributing factor, Leader continued, “are advancements made in science and technology which the enemies opposed fiercely and spared no attempt to bring to a halt Iran’s rapid pace toward technological innovations especially in nuclear industry through assassination of our scientists.”

“On the case of viruses corrupting our scientific systems, I believe we could file a lawsuit against the circles behind the malware; however, no such course of action was followed; economic strength and deterrence defensive capabilities are other factors of a sovereign nation,” emphasized Ayatollah Khamenei. “Political convergence should guarantee national unity in the plurality of political tastes and orientations, while securing coordination between the grassroots and the Islamic system.”

Leader also reiterated his former points about the importance of the young population which should be a priority in government planning. Elsewhere in his speech, Ayatollah Khamenei reaffirmed remarks by Foreign Minister Zarif with complimentary comments. Mr. Zarif had famously told during a Parliament open session that the nature of the US would not change and there would be no difference between Republicans and Democrats; “the US is the US of Donald Reagan’s time and some of our elites would inaccurately judge compromise with the US as benefiting the country; our principles would never come to coordinate with those of the US, and we should not see the situation as a win-win situation,” he recommended.

“The issue with the US is existential threat to the Islamic Republic of Iran which would not be solved through conventional means of negotiation, since our motives and strength for anti-imperialism, irreconcilable to their hegemony as it is, comes from Islam,” he told the meeting. “They had begun hostility from the outset and the main reason behind the animosity is not by no means Iran’s provocations.”

On domestic issues, Leader of the Islamic Revolution cited recession and unemployment as pressing issues of all governments of the Islamic Republic; “the sanctions are not a cause of economic problems; rather, it is a chronic disease which has gone untreated during all governments; improved productions and oil exports is a need; however, in a country which has the largest gas reservoirs in the world, unnecessary imports of gasoline would be undermining domestic capabilities and therefore should be avoided,” he concluded.

Share
Previous …ISIS harshly stoned woman to death in public in Ramadan
Next Islamophobia on rise in Germany: study