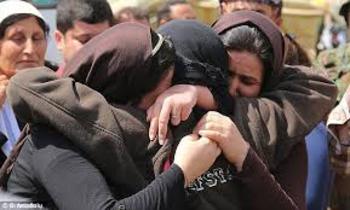 Scores of Yazidi Women Entrapped by ISIS in Fallujah

Scores of Kurdish Yazidi women and children are now in Fallujah under ISIS captivity, and they need protection as the Fallujah operation continues, warns a Kurdish official.

Hussein Kuro, Head of the Directorate of Yazidi Abductees Affairs in Dohuk province of the Kurdistan Region, said that 150 to 200 Yazidi women and children are reportedly in Fallujah now under a potential threat of being used as human shield.

Kuro said they have talked to the Iraqi army officials and Shi’ite militia Hashd al-Shaabi to protect the Yazidi captives along other civilians while advancing into the city.

More than 5,000 Yazidi women and children were taken captive in August 2014 when the IS insurgents overrun the city of Sinjar in northern Iraq. Many others were killed by the terrorist group, or forced to escape their homes at the time.

The Kurdish official also demanded from the Iraqi government to immediately send the Yazidis back to Kurdistan Region when they liberate the city.

The Iraqi army, the Shi’ite militias and some Sunni tribal forces have launched a joint operation to liberate Fallujah from IS. The city was seized by the extremist group in early 2014.

The United Nations and other international organizations have voiced concerns over the operation, warning that IS is using civilians in the city as human shields to ward off the government’s offensives.