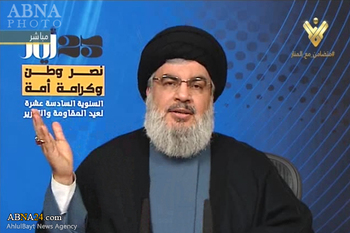 Sayyed Nasrallah: Axis of Resistance to Triumph, Palestine Banner to Be Raised again

Hezbollah Secretary General, Sayyed Hasan Nasrallah, stressed that the axis of Resistance won’t be defeated and will keep on supporting Palestine, whose banner will be raised again.

In a popular ceremony in the Bekaa town of Nabi Sheet on the occasion of “Resistance Liberation Day,” Sayyed Nasrallah stressed that the Zionist entity “is our enemy” and that the only way to confront this enemy is by resistance.

His eminence renewed commitment to the tripartite formula of “army, people and resistance,” noting that this formula is targeted and that “we should work together to confront this threat.”

Hezbollah S.G. hailed the municipal elections with took place in Lebanon in general and especially in south last Sunday, stressing that the elections proved the strength of alliance between Hezbollah and Amal movement.

Sayyed Nasrallah thanked the resistance crowds for taking part in the municipal vote, noting that the electoral turnout was high.

The resistance leader noted that the situation in the region is heading towards escalation due to the US presidential elections, calling the Lebanese and the nation to be aware against the seditious scheme plotted by the resistance enemies.

Despite the escalation, Sayyed Narsallah stressed that the axis of resistance will go ahead with securing achievements in several regions including Syria and Iraq, noting that the end of the Takfiri group, ISIL, is near.

Sayyed Nasrallah started his speech by talking about the occasion, stressing the importance of marking the “Resistance and Liberation Day” as a national day “in a bid to benefit from our history for our future.”

“We stick to this occasion as any nation does with its history and national occasions,” Sayyed Nasrallah addressed cheering crowds in Nabi Sheet.

Meanwhile, his eminence said that all the Lebanese should mark this day, calling upon those (political parties) who disagree with Hezbollah to put these disagreements aside and consider this day as a national one.

Sayyed Nasrallah also said that our generations should know more about the Resistance and Liberation Day, stressing that the repercussions of liberations must always be recalled.

“The security Lebanon has been witnessing is by virtue of the May 2000 liberation.”

On the other hand, Sayyed Nasrallah renewed his call to abide by the tripartite formula of “army, people and resistance,” noting that this formula is being targeted by the resistance enemy.

“Our army, our people and our resistance is targeted… we should be aware. We should believe in our capabilities, we can defend our country, we can build our country.”

Axis of Resistance Won’t Be Defeated

His eminence urged the Palestinians “not to bet on those who abandoned them for nearly 70 years,” stressing that “despite confusions aroused by the resistance enemy (through latest developments in the region), neither Iran nor Syria will abandon Palestine.”

“Iran and Syria will keep on supporting you,” Sayyed Nasrallah addressed the Palestinian people, stressing that their liberation can be achieved by unity, steadfastness and resistance.

In this context, Sayyed Nasrallah stressed that the Axis of Resistance will triumph and that the banner of Palestine will be raised again.

His eminence meanwhile said that the Bekaa was loyal to resistance and will keep doing so, stressing that the Bekaa is the front line in confronting the savage Takfiris.

Hezbollah S.G. hailed the municipal elections taking place in the recent weeks as an achievement, noting that the vote proved strength of Hezbollah-Amal alliance.

“I thank our people for their active participation in municipal and mukhtar elections in Lebanon,” Sayyed Nasrallah said, hailing the high electoral turnout.

“The results of municipal elections assured the strength of the alliance between Hezbollah and Amal and represent the confidence granted by the people to this alliance.”

In this context, Sayyed Nasrallah called on the Lebanese to put their domestic disagreements aside and cooperate together in a bid to build Lebanon, noting that the incoming municipal councils are responsible for meeting the people’s demands.

Meanwhile, Sayyed Nasrallah stressed that the parliamentary elections, which are due in 2017, must be held on time, warning against delaying the vote.

“Some parties refuse to hold parliamentary elections under the pretext of the security situation. Now, this pretext is over and the municipal vote proves this.”

“We oppose the 1960 electoral law and support another one based on proportionality,” Sayyed Nasrallah said.

Whereas concerning the Lebanese presidential elections, Sayyed Nasrallah said that Hezbollah backs holding this, assuring that the resistance party won’t abandon its ethical and political commitments, referring to his backing the candidacy of MP General Michel Aoun.

On the situation of region, Sayyed Nasrallah said that the current administration in the United States is seeking to secure achievements in order to benefit from them ahead of the presidential elections in US.

“The region is heading towards escalation because of the US presidential elections and we should deal with this situation with high responsibility and awareness,” his eminence said.

“As Lebanese we should unite and put our disagreements aside in order to defend our country against seditious schemes.”

The end of ISIL is near, Sayyed Nasrallah vowed, stressing that Hezbollah will go ahead with his achievements against the Takfiris in order to reach the final victory.

“In Liberation day we renew our promise to Sayyed Abbas al-Mousawi (former Hezbollah Secretary General) to preserve the resistance and to achieve more victories,” Sayyed Nasrallah concluded his speech.

Share
Previous A sublime man will come and save humanity from oppression, injustic
Next Scores of Yazidi Women Entrapped by ISIS in Fallujah