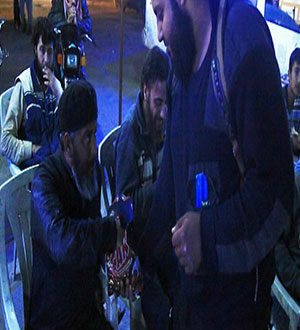 ISIS have claimed the deadly attacks in Brussels and released photographs showing fighters handing out sweets to residents in Syria to celebrate the massacre in Europe.

Bags of sweets and other items were handed by militants to young children and men in the province of Deir Ezzor, eastern Syria.

The photos included a statement, describing how ISIS had distributed sweets among members in ‘joy of the blessed attack against the people in Brussels.’

No women are shown in any of the photos and the men handing out the sweets appear to be wearing shoulder holsters.

The news comes as the death toll for the Brussels attacks was confirmed to have risen to 34.