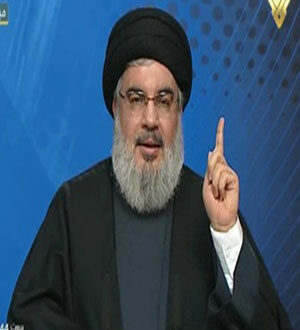 Hezbollah Secretary General Sayyed Hasan Nasrallah delivered a televised speech on Tuesday in which he tackled the latest developments specifically after the Saudi escalation and threats against Lebanon.

His eminence pointed out that “since Saudi announced about halting the supposed donation to the Army, a wide political and media campaign in Lebanon and the region took off, and there was clear escalation in stances by Saudi, some Gulf states, and Lebanese sides. This escalation – which we barely commented on – resulted in a tense atmosphere in Lebanon on the political, media, and public levels which spread fear among the Lebanese inside and outside Lebanon.”

“Many rumors came out and some Saudi TV stations broadcast offensive programs which led to developments on the streets. Since 19-2-2016 – the day when Saudi announced halting its donations – we entered a new stage in the political and media conflict with Saudi,” Sayyed Nasrallah explained.

As a result to that, he added: “The other political party took action and had public movements and delegations as well as escalations and incitements, and statements from unknown sources were distributed claiming that Hezbollah intended to break into some regions and that Tareek Al-Jdeede was a target… In addition, Saudi and some Gulf countries prohibited their citizens from traveling to Lebanon and demanded those in Lebanon to leave for security reasons.”

Sayyed Nasrallah explained that the action that was taken by some people in response to the program on MBC helped in raising fear and concern among the Lebanese, however, he assured: “In Hezbollah, we are strong and content and we are in our best status since five years. We are not pressured, and we are concerned about stability, security, and civil peace.”

His eminence considered that “when media outlets refer to such a low level, this would be an indication to their weakness. Anyone can wage a media campaign against us, but this level is too low and it indicates weakness,” adding that “this level is not worth commenting on or responding to.”

As for the reactions on the streets, Sayyed Nasrallah considered that “what happened was a normal and spontaneous response by some citizens who are loving and truthful. There could have been some violations, but the background of this action was out of love, yet this is not the right nor the appropriate way to respond.”

He asserted that Hezbollah did not want to go into a clash with anyone and that it had no intention to resign from the government, considering that “holding on to it is a national responsibility as we are partners”.

Addressing the youth who took to the streets in response to the video broadcast on MBC, Hezbollah secretary general stressed that “You don’t need to go to the streets and I ask you not to do so no matter what the programs or statements against me or against Hezbollah were. We must seek effective and studied responses that would serve our goals rather than the enemy’s goals… Israel, Saudi, and some other sides want a Sunni Shiite incitement in Lebanon. Are we supposed to serve them? Any action needs arrangement… and when Hezbollah wants people to go to the streets, I will personally come out and ask you to do so, but as long as we didn’t ask this means there is no benefit in that.”

His eminence further called on Hezbollah regional officials to “gather the young men who took to the streets and inform them that such action would not be effective,” he further asked them to directly control such actions and to arrange with “Amal Movement” officials.

Regarding some inappropriate slogans that were raised, Sayyed Nasrallah pointed out that “in some places offensive slogans were raised against big Muslim figures, and this a major fault that the Supreme Leader Imam Ali Khamenei clearly prohibited, as he prohibited insulting, and anyone who is concerned about his religion should be aware of that.”

On another hand, Sayyed Nasrallah referred to the important role that social media plays today, indicating that “couple of days ago Israel said that there was an Israeli team following the social media pages… we must be aware of the street as well as the social media, and no one should undervalue this field for even the countries that created it are aware of its dangers on it…”

His eminence stressed the importance of dealing responsibly with this field “for our religion does not permit us to curse and it is against our morals to insult or offend anyone on the personal level, we are only concerned of proposing facts…”

Referring to the latest developments with Saudi, Sayyed Nasrallah pointed out that the three million dollar donation that the kingdom decided to grant the Lebanese Army was halted since the departure of King Abdullah and not because of Hezbollah’s latest stances as claimed.

But now since there was a problem with Hezbollah, Saudi announced about its one year old decision and blamed the resistance for it, he explained, calling on everyone who has information about this issue to reveal them.

He further reassured that “claims that Hezbollah controls the Lebanese government are a joke as some parties have more influential decisions in the government,” and indicated that “FM Gibran Bassil was wronged, because he had condemned the attack on the Saudi embassy in Tehran.”

Based on that, Sayyed Nasrallah emphasized that “we don’t ask any ally to take a stance on our side in this battle and Hezbollah is capable of confronting it by himself…” adding that “the problem is with Hezbollah, they want the government, political powers, and Lebanese people inside and outside Lebanon to stand in the face of Hezbollah so that it abandons its stance from Saudi, even if that required incitements, civil war or toppling the government. Saudi is not concerned about that, it is only concerned about its own benefits.”

Hezbollah secretary general considered that “Saudi has been furious about Hezbollah since 2005 and we kept silent… the explosives laden cars that were sent to some Lebanese regions were managed by Saudi… All the wars that Saudi waged in the region were indirect, only in Yemen it waged a direct war, and whoever wants to keep silent about that let him be, but we cannot keep silent on all the crimes that Saudi is committing in Yemen.”

“This is our crime which we are proud of… throughout my life I have done the good and the bad, but if I was asked about the most honorable thing that I have done, I would say it was delivering that speech on the second day of the Saudi war on Yemen. This is Jihad, because I am saying the truthful word, and this Yemeni people is so oppressed that it overcame the Palestinian people with its oppression. There is no oppression today like the one in Yemen,” Sayyed Nasrallah stated.

He stressed that if he kept silent on the Saudi war on Yemen he would be giving legitimacy for waging any war in the Arab and Islamic world, recalling that Qatar was threatened to be expelled from the Gulf Cooperation Council when “Al Jazeera” channel used to criticize Saudi.

Finally, his eminence indicated that “Saudi had tried to pressure us to keep silent but it failed. Today it is trying to pressure us through the Lebanese people, and their problem is not the war in Syria or any other place, but it is our boldness in speaking against the king and the regime which very rare dare to oppose.”

“Does Saudi have the right to punish the Lebanese because one Lebanese party took a stance? This question is from an Arab, Islamic, and humanitarian perspective. Is he an Arab that who takes back a donation he offered or kicks out his guests?” Sayyed Nasrallah asked, pointing out: “If there were a criminal here, than I am the criminal from your (Saudi) perspective. Why punish the Lebanese people and the Army and what moral or legitimate scale permits the Saudis to treat the Lebanese in this offensive way?”

“Saudi which treats Yemen, Syria, Iraq, and Bahrain like that, treats Lebanon the same way,” Sayyed Nasrallah concluded, addressing the Saudis: “Your problem is with us, it is not with the country or with the Lebanese…”