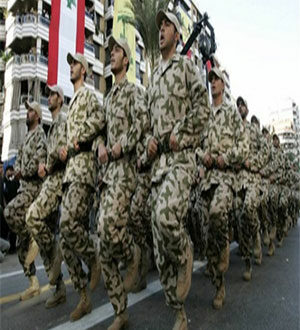 Israeli Media: Hezbollah Become an Army in Every Respect

Israeli military assessments concluded that the Lebanese party of Resistance – Hezbollah – has become an army in every respect, an article published on Zionist Haaretz daily reported on Friday.

The military analyst of the Hebrew daily, Amos Harel, addressed “Hezbollah army” in a lengthy report, in which he stated that the Zionist entity should activate during the next war with Lebanon an unprecedented force, i.e. bombing of civilian infrastructure in all regions of the country without exception, in order to reach a quick cessation of the war and to stop the mass of rockets Hezbollah will fire into every spot in the occupied territories.

“If a war breaks out… the government will apparently also consider an attack on civilian infrastructure of the Lebanese state in an attempt to bring about the quick cessation of the firing of missiles into the home front,” he said.

A former Zionist chief of staff, Amnon Lipkin-Shahak, who led the fight against Hezbollah in the security zone in southern Lebanon in the mid-1990s, concluded that the Zionist army had to treat Hezbollah as a guerilla organization rather than as terrorists or terror cells.

However, the Israeli military agency is now coming to the recognition that Hezbollah has become an army in every respect, based on the experience gained during the fighting in Syria

“In the context of the Syrian war, the IDF is now coming to the recognition that the Lebanese enemy has become an army in every respect,”

Harel noted that Hezbollah is now fighting in Syria side by side with Iranian and Russian commanders, which upgraded its fighting capability, especially with the wide range of operations including joint actions with airplanes, helicopters, drones, artillery, tanks and advanced intelligence capabilities.

“The organization is now identified with the side that appears to have the upper hand in the war. The close work with Iranian commanders and recently, to a lesser extent, with Russian officers as well, has upgraded Hezbollah’s fighting capability. Those commanders and fighters who have survived the war years have accumulated very valuable experience in difficult battles. In Syria, Hezbollah has engaged in a wide range of operations including joint actions with airplanes, helicopters, drones, artillery, tanks and advanced intelligence capabilities,” he said.

The Zionist analyst underlined that though at present Hezbollah does not have planes or tanks of its own, in every other respect its capabilities are nearly equal to those of a mid-level army of about 45,000 fighters, including 21,000 standing forces, more than 100,000 increasingly accurate rockets and missiles, of which several thousand are mid- and long-range.

He also pointed at the speech of Zionist Prime Minister Benjamin Netanyahu at the United Nations General Assembly last October, in which he stated that Hezbollah has managed to smuggle advanced weapons systems from Syria into Lebanon, including accurate surface-to-surface missiles, SA-22 anti-aircraft missiles and Yakhont P-800anti-ship cruise missiles.

“The continuous supply of high-quality weaponry and the battlefield experience it is accumulating in Syria have also given Hezbollah independent capability in essential areas like commando fighting and operating drones, including attack drones,” Harel added.

The Zionist writer underscored an article by a military intelligence officer that outlined Hezbollah’s possible intentions in another war against the occupation entity, especially conquering the Galilee.

“A surprise attack along the border [between Lebanon and the Zionist entity] in which commando forces from the organization try to attack a community or a small military base with the aim of opening the fight with a perceived achievement, creating an impression Israel would have difficulty overcoming,” the officer wrote in the military journal “Ma’arakhot”.

Moreover, Harel believed that it can be assumed today that Hezbollah aspires to upgrade capabilities for simultaneous attacks on a number of Zionist settlements and military outposts along the border, which would enable it to hinder the mobility of Zionist units along the border and the recruitment of reserve units.

“The terrain along the border with Lebanon is mountainous and complicated. This topography affords the attacker significant ability to surprise, which almost eliminates the need to dig attack tunnels,” he said.

In spite of the Zionist military assessments which imply that Hezbollah is thoroughly engaged in Syria war, and while the military intelligence assessment holds that the risk of a Hezbollah-initiated war is low, the possibility that a war could break out as the result of a miscalculation between the sides or due to a certain incident on the borders has been raised to moderate likelihood.

“In any case,” Harel wrote, “there is a need for a move to coordinate expectations between the IDF and the Israeli public,” because the Zionist officers understand that any additional war with Lebanon will cost their army many losses, that the mass of rockets Hezbollah will fire into communities along the border will require a partial evacuation of inhabitants and that missile damage to the center of the country will be far worse than what they experienced in the previous war on Lebanon in 2006.

The Zionist analyst concluded that if a next war breaks out with Lebanon, the Zionist entity will have to apply unprecedented force, noting that heavy bombardments from the air will not suffice, which will require from the occupation army to practice “a considerable ground advance to exact a price from Hezbollah.”

“There is a challenge of a magnitude the IDF [Zionist army] has not dealt with in recent years – and from Israel’s perspective this is another reason to maintain the deterrence against Hezbollah and delay the next war as much as possible,” Harel ended up saying.