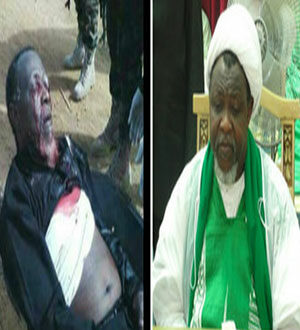 Popular leader of the Islamic Movement of Nigeria, Sheikh Ibrahim El-Zakzaky was secretly flown out of Nigeria for treatment of gun shot injuries he suffered during the Army’s brutal attack on members of the Movement on Dec. 2015, Vanguard reported yesterday.

It would be recalled that the Nigerian Army shot Sheikh Zakzaky 6 times while they shot his wife twice. One of the shot they targeted her reproductive organs so that according to then “she will never bring another Shia to the world”.

It is important for us to understand that with the massive force that the Nigerian government attacked the residence of Sheikh Zakzaky, the goal was to kill Sheikh Zakzaky and his entire family. They killed his 3 children, they killed his elder sister Hajiya Fatima who was 70+ years and they killed all the members who were at his residence, and many others sustained various degrees of injuries with some still on admission at the Ahmadu Bello University Teaching Hospital in Shika near Zaria. The fact that the Sheikh survived 6 bullets is a miracle in itself.

Since the Army’s attack on defenseless members of the Islamic Movement, his whereabouts has been shrouded in secrecy until some conscious media revealed that he was moved from Kaduna to a house in Abuja belonging to one of the security services.

It is also important to note that the same ideology that inspired ‪‎ISIS‬ and ‪Boko Haram‬ is the same ideology that inspired the inhuman & brutal Zaria massacre. And all those who were injured & survived will bear witness that the slogans that the Nigerian Army chanted while executing the brutal Zaria massacre is the same slogans that Boko Haram would have chanted when massacring Shia Muslims.

Several security sources who are knowledgeable in the matter however revealed yesterday that due to the seriousness of the injuries the Shiite leader sustained, he was secretly flown to France by the Nigerian government some weeks ago for treatment before being returned to the country two weeks ago.

One of the sources said: “it is true that the federal government flew him out of the country for treatment. He was stabilized before he was brought back to Nigeria. The government did not want to take chances by keeping him in the country. We did not want a repeat of the incidence with the late leader of the Boko Haram movement whose death in custody exacerbated the crisis in the north east”.

According to Haruna Elbinawi, a member of the IMN: The Nigerian authorities took Sheikh Zakzaky to France not because they have human sympathy, Nay; these people are extremely wicked & evil. They took him to France for better medical attention because some prominent Nigerians had warned President ‪Buhari‬ of the consequences of the death of Sheikh Zakzaky in their hands. Some of the members who were wounded from gun shot wounds died in Kaduna prison due to lack of proper medical attention & this is the true face of the Nigerian oppressors.

Share
Previous Muslim Students in Canada hand out roses during Islam awareness week
Next Zaria Massacre: Army deliberately targets reproductive organs of IMN’s women; They shouted ‘there will never be Shia in Nigeria’