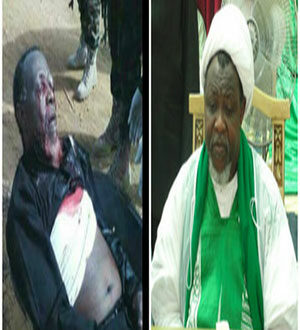 Nigerian army soldiers fired six bullets at Sheikh Ibrahim al-Zakzaky, seriously injuring the Shia cleric when they raided his residence to arrest him, says a member of the Nigerian Supreme Council for Islamic Affairs (NSCIA).

Professor Dahiru Yahaya of Bayero University Kano (BUK), who has visited Sheikh Zakzaky, said he was told by the cleric that he was severely wounded after the soldiers fired six bullets at him. The academic made the remarks in an interview with Hausa Radio, the Africa desk of the IRIB (Islamic Republic of Iran Broadcasting) world service, on Sunday.

Zakzaky is the leader of the Islamic Movement of Nigeria (IMN). He was injured and arrested during the raid by the army on his home in the northern city of Zaria, Kaduna State, in December.

Yahaya said the condition of the cleric has improved. The academic is currently working with a committee set up to follow up on the well-being of Sheikh Zakzaky.

The university professor described as “very bad and repulsive” the treatment of the committee members by army officials upon their inquiry about the sheikh, adding that the police also denied them a meeting with Zakzaky.

He said Sheikh Zakzaky is currently detained by the intelligence ministry, adding that the Nigerian government only permitted three members of the committee to visit the cleric.

When asked about Zakzaky’s opinion on the recent developments in Nigeria, Yahaya said the cleric only sufficed expressing his “deep regret.” The academic said the conduct of the Nigerian army had been “truly inhumane.”

On December 12 last year, Nigerian soldiers attacked Shia Muslims attending a ceremony at a religious center in Zaria, accusing them of blocking the convoy of the army’s chief of staff and attempting to assassinate him. The Shias have categorically denied the allegations.

The following day, Nigerian forces also raided Zakzaky’s home and arrested him after reportedly killing those attempting to protect him, including one of the Islamic Movement of Nigeria (IMN)’s senior leaders and its spokesman.

The two attacks led to the deaths of hundreds of members of the religious community, including three of Zakzaky’s sons.

The Shia cleric is said to have been charged with “criminal conspiracy and inciting public disturbances.”

The IMN has called for Zakzaky’s unconditional release and for Abuja to respond to the “unjustifiable atrocities committed by the army.”

On Thursday, IMN said more than 700 of its members are still unaccounted for a month after the deadly attacks in Zaria.

The IMN says it will continue the peaceful campaign to secure the release of Sheikh Zakzaky and the other detainees.

On December 16, the London-based Islamic Human Rights Commission (IHRC) said there was credible evidence of mass graves in Nigeria following the deadly attack on Shias.

The rights group said the Nigerian military had secretly buried hundreds of bodies in the graves after storming the house of the Shia cleric.

Human rights organizations have called for a full investigation into the deadly attacks by Nigerian forces against Shia Muslims.

Amnesty senior research adviser Lucy Freeman on Friday described the Nigerian army’s human rights violations as “shocking,” saying soldiers “going above and beyond and outside of the rule of the law” was not unusual.