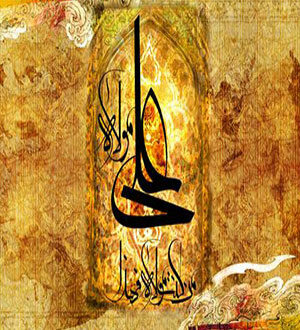 The following is a description of the historic event of Ghadir Khumm. Click on the book icons below to see the detailed references backing up each key element of this event. The separation into contexts enables one to see how well each component of the event is attested in the sources.
For example, to see how many Sunni sources record the sentence uttered by the Prophet [s] to appoint Imam ‘Ali [a] – man kuntu mawlahu fa `Aliyyun mawlahu

The Farewell Pilgrimage
Ten years after the migration (hijrah), the Messenger of Allah [peace and blessings be upon him and his Progeny] ordered to his close followers to call all the people in different places to join him in his last pilgrimage. On this pilgrimage he taught them how to perform the pilgrimage in a correct and unified form.
This was first time that the Muslims with this magnitude gathered in one place in the presence of their leader, the Messenger of Allah [s]. On his way to Makkah, more than seventy thousand people followed Prophet [s]. On the fourth day of Dhu’l-Hijjah more than one hundred thousand Muslims had entered Makkah.

Location
After completing his last pilgrimage (Hajjatul-Wada’), Prophet [s] was leaving Makkah toward Madinah, where he and the crowd of people reached a place called Ghadir Khumm (which is close to today’s al-Juhfah). It was a place where people from different provinces used to greet each other before taking different routes for their homes.

Revelation of Qur’anic Verse 5:67
In this place, the following verse of the Qur’an was revealed:
“O Apostle! Deliver what has been sent down to you from your Lord; and if you don’t do it, you have not delivered His message (at all); and Allah will protect you from the people …” (Qur’an 5:67)
The last sentence in the above verse indicates that the Prophet [s] was mindful of the reaction of his people in delivering that message but Allah informs him not to worry, for He will protect His Messenger from people.

The Sermon
Upon receiving the verse, the Prophet [s] stopped on that place (the pond of Khumm) which was extremely hot. Then he sent for all people who have been ahead in the way, to come back and waited until all pilgrims who fell behind, arrived and gathered. He ordered Salman [r] to use rocks and camel toolings to make a pulpit (minbar) so he could make his announcement. It was around noon time in the first of the Fall, and due to the extreme heat in that valley, people were wrapping their robes around their feet and legs, and were sitting around the pulpit, on the hot rocks.
On this day the Messenger of Allah [s] spent approximately five hours in this place; three hours of which he was on the pulpit. He recited nearly one hundred verses from The Glorious Quran, and for seventy three times reminded and warned people of their deeds and future. Then he gave them a long speech.
The following is a part of his speech which has been widely narrated by the Sunni traditionists:

Tradition of the Two Weighty Things (thaqalayn)
The Messenger of Allah [s] declared:
“It seems the time approached when I shall be called away (by Allah) and I shall answer that call. I am leaving for you two precious things and if you adhere to them both, you will never go astray after me. They are the Book of Allah and my Progeny, that is my Ahlul Bayt. The two shall never separate from each other until they come to me by the Pool (of Paradise).”

Acknowledgement of Authority
Then the Messenger of Allah continued:
“Do I not have more right over the believers than what they have over themselves?”
People cried and answered:
“Yes, O’ Messenger of God.”

Text (nass) of the Designation
Then followed the key sentence denoting the clear designation of ‘Ali as the leader of the Muslim ummah. The Prophet [s] held up the hand of ‘Ali and said:
“For whoever I am his Leader (mawla), ‘Ali is his Leader (mawla).”

These were the key parts of the speech of the Prophet [s]. There are also more detailed versions of this sermon which are recorded by many Sunni authorities.

Revelation of Qur’anic Verse 5:3
Immediately after the Prophet [s] finished his speech, the following verse of the Qur’an was revealed:
“Today I have perfected your religion and completed my favour upon you, and I was satisfied that Islam be your religion.” (Qur’an 5:3)
The above verse clearly indicates that Islam without clearing up matter of leadership after Prophet [s] was not complete, and completion of religion was due to announcement of the Prophet’s immediate successor.

Hassan b. Thabit’s poetry
Immediately after the Prophet’s speech, Hassan b. Thabit, the Companion and poet of the Messenger of Allah [s], asked for his permission to compose a few verses of poetry about Imam ‘Ali [a] for the audience. The Prophet [s] said: “Say with the blessings of Allah”. Hassan stood up and said: “O’ people of Quraysh. I follow with my words what preceded and witnessed by the Messenger of Allah [s]. He then composed the following verses at the scene:
He calls them, (on) the day of Ghadir, their Prophet
In Khumm so hear (and heed) the Messenger’s call,
He said: “Who is your guide and leader? (mawlakum wa waliyyukum)”
They said, and there was no apparent blindness (clearly):
“Your God, our guide, and you are our leader
And you won’t find from among us, in this, any disobedient,”
He said to him: “Stand up O’ Ali, for I am
pleased to announce you Imam and guide after me (min ba’di imam(an) wa hadiy(an)),
So whomever I was his leader (mawla), then this is his leader (mawla)
So be to him supporters in truth and followers,”
There he prayed: “Allah! Be a friend and guide to his follower
And be, to the one who is Ali’s enemy, an enemy”

Oath of Allegiance
After his speech, the Messenger of Allah [s] asked everybody to give the oath of allegiance to ‘Ali [a] and congratulate him. Among those who did so was ‘Umar b. al-Khattab, who said:
“Well done Ibn Abi Talib! Today you became the Leader (mawla) of all believing men and women.”

Number of Companions in Ghadir Khumm
Allah ordered His Prophet [s] to inform the people of this designation at a time of crowded populous so that all could become the narrators of the tradition, while they exceeded a hundred thousand.
Narrated by Zayd b. Arqam: Abu al-Tufayl said: “I heard it from the Messenger of Allah [s], and there was no one (there) except that he saw him with his eyes and heard him with his ears.”

Revelation of Qur’anic Verse 70:1-3
Some Sunni commentators further report that the first three verses of the chapter of al-Ma’arij (70:1-3) were revealed when a dispute arose after the Prophet [s] reached Madinah. It is recorded that:
On the day of Ghadir the Messenger of Allah summoned the people toward ‘Ali and said: “Ali is the mawla of whom I am mawla.” The news spread quickly all over urban and rural areas. When Harith Ibn Nu’man al-Fahri (or Nadhr Ibn Harith according to another tradition) came to know of it, he rode his camel and came to Madinah and went to the Messenger of Allah [s] and said to him: “You commanded us to testify that there is no deity but Allah and that you are the Messenger of Allah. We obeyed you. You ordered us to perform the prayers five times a day and we obeyed. You ordered us to observe fasts during the month of Ramadhan and we obeyed. Then you commanded us to offer pilgrimage to Makkah and we obeyed. But you are not satisfied with all this and you raised your cousin by your hand and imposed him upon us as our master by saying `Ali is the mawla of whom I am mawla.’ Is this imposition from Allah or from you?”
The Prophet [s] said : “By Allah who is the only deity! This is from Allah, the Mighty and the Glorious.”
On hearing this Harith turned back and proceeded towards his she-camel saying: “O Allah! If what Muhammad said is correct then fling on us a stone from the sky and subject us to severe pain and torture.” He had not reached his she-camel when Allah, who is above all defects, flung at him a stone which struck him on his head, penetrated his body and passed out through his lower body and left him dead. It was on this occasion that Allah, the exalted, caused to descend the following verses:
“A questioner questioned about the punishment to fall. For the disbelievers there is nothing to avert it, from Allah the Lord of the Ascent.” (70:1-3)