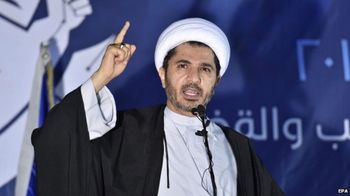 During a phone call with Sheikh Salman shortly after the court decision against him, the opposition leader sent a message of support to the people of Bahrain calling on them to withstand until the just demands been met.

“I had a phone call from the Secretary of the people after the first court session. His voice filled me with hope and steadfastness,” Radi said on her Twitter account.

“Sheikh Ali asked me to envoy a message to the loyal people of Bahrain and to each of his supporters, in which I touched the steadfastness and high spirits,” she added.

“He asks you to keep going until our just demands that we consider necessary for the modernization of this country and its stability achieved,” Radi wrote.

“He assures you that our march is persistent and will not stop under any circumstances until these people get their natural and normal rights,”

“He also expressed readiness to sacrifice the rest of his life until democracy achieved in Bahrain, so that this people blessed with freedom, dignity and equality,” Radi concluded.