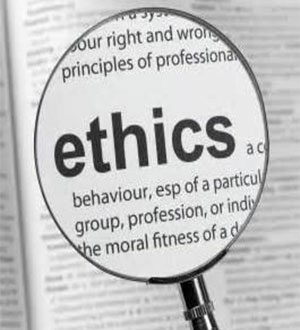 Ayatullah al-`Uzma al-Hajj ash-Shaykh Nasir Makarim Shirazi
Is it possible to alter individuals’ morality and mentality through training?
This is the question, which clarifies the position of ethics, because if we accept that morality and mentality of individuals depend on the structure of their body and soul, ethics will be vain and purposeless. But if we accept that it is changeable, the importance and value of this science is manifested well.
Some of the scientists have accepted the first possibility and believe that as some of trees bear bitter fruits, and as a gardener cannot change his nature, mentality of the lowborn and impure-hearted will not be changed through training and even if it is changed, it will be very transitory and superficial, and will soon be restored to its first mode.

They suggest that structure of body and soul has a close relation with morality, and in fact morality of each person depends on the disposition of his soul and body, and for this reason, it is not changeable. They cite as a proof the traditions like:
The people are like the mines of gold and silver. 1
In contrast to this attitude, majority of scientists believe that morality and mentality of individuals is completely alterable through training.
A great deal of experiences on the immoral persons has fully proved this reality that a lot of wicked and vicious individuals are perfectly corrected by a “healthy environment”, “good association” and “high training”. Otherwise, all of divine instructions of prophets and religious leaders were cancelled, because all of them are concerned with training men’s souls. On the other hand, all punishments having a corrective aspect, being common among all nations throughout the world, were vain and ineffective.
We see that even fierce and wild animals are domesticated through training, and are used for the purposes against their original disposition. How can we believe the ill-humour in men to be more rooted than ferocity of wild animals?
We believe that the best way for proving this claim is studying the procedure of formation of a “moral habit” in a bid to find the way of eradicating it in the same way it is formed. We know that every good or bad action leaves a similar effect in man’s soul and “attracts” man’s soul to it.
Practice and repetition of the action increases this effect and gradually a feature called “custom” is achieved and with more practice, it changes into “habit”, and thus man’s interior tendency to perform that action is increased by rooting of customs and habits. This reality is proved by experience.
Therefore, if moral customs and habits are formed through repetition of an action, they are removable in the same way. That is to say, first, “action”, then “repetition” and then “formation of a moral attribute and habit”.
Of course, suggestion, reflection, correct instructions and healthy environment- which have a suggestive effect are very effective in predisposing soul for acceptance and formation of a good morality.
Ill-humour is a sort of disease
All of us know that man enjoys a special and particular position among all living creatures, because his personality is composed of antagonistic powers. On one hand, rebellious sensual desires as well as animal instincts and inclinations invite him to insolence, aggression to the rights of others, sensuality and lechery, lie and treachery, and on the other hand, the powers of intellect and cognition, humanistic affections and conscience call him to philanthropy, chastity, honesty and virtue.
Struggle of these powers exists in all men and relative dominance of one of these factors causes men to be in completely different levels in view of humanistic values, and increases the distance of man’s “ascending” and “descending” curve. At times he becomes superior to the nearest-stationed angels, and at others he becomes more inferior to the most dangerous predator animals.
This fact is also deduced from several traditions. For instance, Imam Ali (A.S.) says:
God granted to the angel only intellect, without lust and wrath, and gave to the animals only lust and wrath, without intellect, but ennobled man to granting all of these. So if his lust and wrath are controlled and ordained by his intellect, he will be superior to the angels, because he has achieved such station despite the existence of an opposing power. 2
But it should be noted that instincts and dispositions and lusts in an original, natural and balanced form are not only harmless, but will also be an essential means for continuation of life.
In other words, as no useless and idle limb is created in the structure of man’s body, any incentive, instinct and disposition has a vital role in the structure of his spirit and soul, and only in case of deviation from normal condition and disturbance of the balance, they will appear dangerous and fatal.
For instance, who can deny the role of “wrath” in man’s life? Suppose when the rights of a person are transgressed; if all of reserve powers of his body are not excited and mobilized, thanks to the wrath; is it possible for him to defend his rights in a composed mood, in which he may not utilize more than one tenth of his reserve powers? But when this anger and wrath is deviated from its main path, and is not any more a powerful tool under control of intellect, it alters man into a fierce animal who does not recognize any boundary.
In addition, the role of man’s moderate desire to wealth, rank and such like in more attempts for development and progress is as obvious as the destructive effect of Mammonism and ambition that is extravagant in these desires.
Thus, as disturbance in corporeal balance is always accompanied with undesirable results called “disease”, disturbance in balance of spiritual powers and instincts and desires too is considered as a sort of “mental disease”, and ethics scholars call it “heart-sickness”.
This concept has basically originated from Holy Qur’an that has considered hypocrisy of a hypocrite as a disease, where it says:
In their hearts is a disease, and Allah increaseth their disease. A painful doom is theirs because they lie. (2:10)

Pages: 1 2 3 4
Share
Previous Amir al-Momineen Ali (A.S.) and the Roman Archbishop
Next Islam and the Position of Women