news: According to a Zionist publication, Ismail Haniyeh, the head of Hamas’ political bureau, announced that the Islamic Republic of Iran paid $ 70 million to Hamas last year. 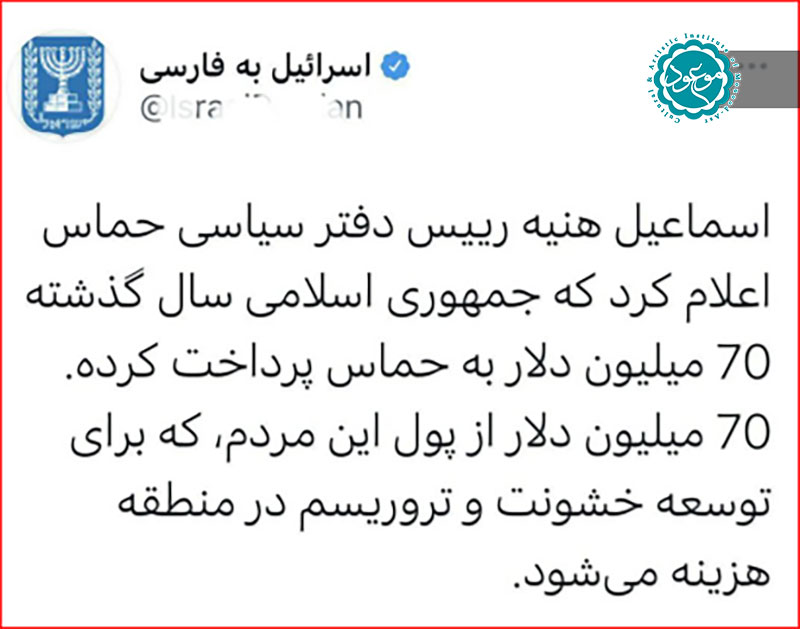 – The United States pays $ 3.8 billion annually to Israel; $ 3.8 billion from the American people, which is spent on the development of violence and terrorism in the region.

– The United States is stationed 6,000 miles beyond its borders in Afghanistan, and its right-wing research institutes and newspapers estimate $ 2.3 trillion in military spending.

– The cost of the US war in Iraq is more than two trillion dollars, and according to Trump, including its profit and inflation, it was about 6.4 trillion dollars. In other words, the United States has spent more than 8,000$ billion in looting, occupation, and murder in West Asia.

– Iran’s military budget this year was only $ 9 billion, while the budget of the UAE with one-tenth of Iran’s population was 23 billion, Saudi Arabia with 50 billion dollars, and Israel with the population of 9 million is 25 billion dollars.

– Iran’s military expenditure in the Islamic Republic is one-tenth of the supreme time of the Shah because, after the 1979 Revolution, the IRI did not want to spend thousands of billions of American weapons annually like Saudi Arabia and the American scarecrows.

Share
Previous Jewish Americans in 2020
Next The size of the U.S. Jewish population