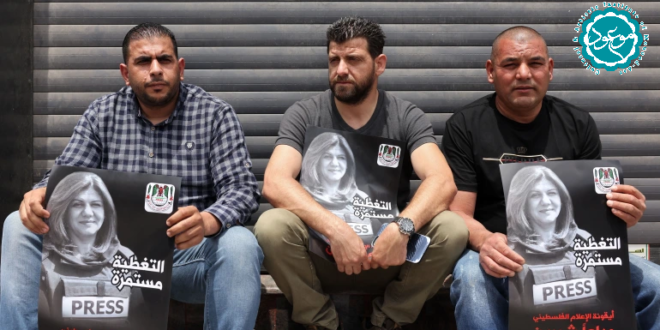 As journalists covering the occupied West Bank, we have become accustomed to Israeli attacks against us.
It is the gruelling reality of life under occupation that, most mornings, Palestinians are awakened with the news of Israel arresting or killing their people.

Today was another one of those devastating mornings.
Palestinians were shocked by the news that veteran Palestinian journalist and Al Jazeera correspondent Shireen Abu Akleh was killed by Israeli forces while covering an Israeli army raid on the Jenin refugee camp in the occupied West Bank.

Abu Akleh was a Palestinian icon whose familiar face and voice had entered the homes of millions of Palestinians and Arabic speakers around the world for more than two decades, as she covered the Israeli occupation.

She was one of the brave Palestinian voices who covered Israel’s deadly incursion on the Jenin refugee camp in 2002, which she wrote about last year, saying:

“To me, Jenin is not a one ephemeral story in my career or even in my personal life. It is the city that can raise my morale and help me fly. It embodies the Palestinian spirit that sometimes trembles and falls but, beyond all expectations, rises to pursue its flights and dreams.”
Now, 20 years later, Abu Akleh was killed in the same place where she so valiantly told the stories of Palestinian resistance under occupation for so many years.

Journalists deliberately targeted
The videos that have surfaced of the moment Abu Akleh was shot are bone-chilling. The piercing screams of her colleagues ring through the screen as Abu Akleh, still wearing her helmet and blue flak jacket marked with the words “PRESS”, lies face down near a tree.

A young Palestinian man from the area manages to hop a fence and pull her body to safety, as gunfire rings in the background.

According to the journalists who were stationed around Abu Akleh, the group was clearly marked as press and made themselves known to Israeli forces in the area.
Despite their clear press markings, Abu Akleh was shot in the face, and another Palestinian journalist was shot in the back.

Despite Israeli claims that Abu Akleh was hit by Palestinian gunfire, journalists present at the scene say it was an Israeli sniper that targeted them.
Abu Akleh’s killing is devastating, but it is not surprising.

Abu Akleh’s killing immediately brings back memories of our colleague Yaser Murtaja, a young Palestinian journalist in Gaza who was shot dead in 2018 by Israeli snipers while covering the Great March of Return protests.

Murtaja, like Abu Akleh, was also clearly marked as press, and was killed while wearing his blue flak jacket.

As journalists covering the occupied West Bank, we have become accustomed to Israeli attacks against us. When covering demonstrations or confrontations in the West Bank, journalists are often shot at with tear gas, rubber bullets and live ammunition.
In cases where Israeli aggression against journalists is not lethal, it can lead to life-threatening injuries and lifelong disabilities. In 2019, Palestinian journalist Muath Amarneh lost his eye after Israeli forces shot him with a rubber-coated steel bullet.

Between 2020 and 2022 alone, PJS says that six Palestinian journalists were killed in the occupied West Bank and Gaza.

Israeli impunity will continue
It is devastating enough to know that Abu Akleh is not the first Palestinian journalist to be killed by Israel, but it is even more distressing to live with the knowledge that she surely will not be the last and that justice for her and her family is but a faraway dream, unlikely to ever be achieved.

Any expressions of “sadness” or calls for an “investigation” into her death by Israel or any of its supporters – including the United States – are just lip service and most certainly are not expressed in good faith.

Israel’s propaganda machine is already working in overdrive to deflect and reassign blame.
The government is circulating unverified videos, claiming that it was in fact Palestinian gunfire that killed Abu Akleh; this despite countless witness testimony from journalists at the scene stating that they were stationed far away from Palestinian fighters, and that it was Israeli gunfire that killed her.

The Israeli government has already positioned itself as a benevolent figure, with Prime Minister Naftali Bennett