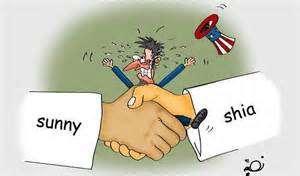 Unity of Islamic Ummah, the Architect for Reviving the Divine Civilization

Research Scholar in Islamic History
Department of Islamic History
Islamic Research Foundation
The Holy Shrine of Imam Reza (A.S.)
Mashhad, IRAN
“And hold fast, All of you together, to the cord of Allah, and do not become disunited “(Al-i Imran 3:103)
Lo! Allah loveth those who battle for His cause in ranks, as if they were a solid structure.(As-Saff 61:4)
The believers are but a single brotherhood ; so make peace between your brothers ; and fear Allah so that you may receive mercy. (Al-Hujurat 49:10)
The Muslim Ummah today is 1800 millions strong and constitute one fourth of the entire mankind with diverse ethnic and linguistic origins. Their geographical location is stretched over the four corners of the globe with magnificent and unique Civilization heritage.

At present Muslim population is about 1.8 billion which makes roughly 30 per cent of world population. About 1300 million Muslims live in 56 Muslim states and are part of UN and OIC. The rest 500 million Muslim are spread in different countries. There is hardly any place on earth, which is not inhabited by Muslims. A significant number of Muslims (220 million) live in India. In Europe and America, Muslim population though insignificant in the past has now increased manifold. Widespread migrations at world level have introduced Muslims to those areas, which hitherto stood untended for centuries from the teachings of Islam. Numerical strength plus the Muslim states’ geographical location have given Muslim a strategic position in today’s world.
Seen in the geo-strategic outlook, the politically independent Muslim states virtually command one-fourth of the world; from Morocco to Indonesia and Kazakhstan to Turkey and Bosnia. Muslim bloc can be divided into two big geographical zones; one, a large chain starting from Morocco/Senegal and through Pakistan entering Central Asia, and two; the most important zone of Bangladesh, Malaysia and Indonesia.
The two zones are of strategic importance for all sea, land and air transport routes. Dead Sea, Red Sea and Caspian are in the center of Muslim states. A number of Muslim countries have seacoasts on Indian and Atlantic Oceans. The important sea gateways like Damial, Suez, Port Said, Djibouti and Aden are under Muslim control. Muslim world is impregnate with important economic resources like agriculture, oil, electricity, coal, iron, uranium, tin, rubber, copper, etc.
About 1/4th of the Muslim world is not simply in a position to achieve sustained economic growth and provide adequate education and other social infrastructure to their citizens, but can also play an important role in the economic and technological development of brother Muslim countries, e.g. Turkey has the skill to manufacture F-16 fighter planes; Algeria, Egypt, Iran, Bangladesh, Malaysia and Kazakhstan have economic strength to help other Muslim countries financially; Pakistan, despite strong Western resistance, has successfully advanced with its nuclear energy agenda in a period almost half that other countries might take, and; the change in oil prices of 1972 and 1980 has tilted the balance of economic strength towards Islamic countries.
In nutshell, we can safely conclude that the strength and centrality which the Muslim Ummah enjoy today has no match in its history (a fact which should never be ignored. It is another sore subject why Muslim world could not take full advantage of its present powerful position on the world checkerboard.
Throughout the last fourteen hundred years of Muslim history, even in the extreme political slumber of the last few centuries, Islamic way of life has played the most influential role in shaping the human destiny. With its divine creed and superb natural codes of practices, Islam’s dynamic and assertive appeal has the edge over all other faiths or man made ideologies.
The meteoric rise and enduring might of Islamic Civilization were the result of the birth of a “best community” (khaira ummatin, Al-Qur’an 3:110) or a “middle community” (ummatan wasatan, Al-Qur’an 2:143) which Allah Subhanahu Wa Ta’ala, (SWT) had raised for mankind.
However, that role has undergone a serious setback in the past centuries due to their own indulgence and negligence. The most devastating disease of the Ummah today is their disunity and discord characterized by political, theological, sectarian and tribal conflict. Thus, the most important and heart-felt requirement of the Ummah today is the need for unity – the unity of mind and action as well as the unity of hearts and emotional feelings among its members. The Muslim hearts today are beating all over the world for their lost unity – the unity of belief, hopes and aspirations in order to seek the pleasure of Allah (SWT).
What is Islamic Unity?
Why did the Muslim Ummah, the architect of the longest and most powerful as well as divine Civilization in human history, lost that unity? How can this be regained in the context of the complex internal and external factors that are dominating the Muslim world?
Moreover, isolated examples of cooperation, Islamic brotherhood and unity at times of necessity between the Muslims and their rulers had always occurred throughout the history. Military assistance to the Sultan of Granada by the Ottoman Sultan in 1483 CE. [History of the Ottoman Turks, E.S. Creasy, Beirut, 1961, p.122] and the unique military help to the Indian Muslims by the ruler of Afghanistan in 1761 are exemplary events of mutual assistance among the Muslim leaders, even in the decadent period of Muslim history.
The most outstanding attempt for global unity of the Muslim Ummah in the last century CE was led by Jamal al-Din Asadabadi famous as Afghani (1838-97 CE ), a leader of towering personality. His Pan Islamic Movement created a political sensation and psychological whirlwind in the Muslim world which was by then the underdogs of the world community.
Asadabadi considered Islam the potential source of Muslim unity and political strength and to this end devoted most of his life. [The Encyclopaedia Britannica, 5th Ed., Vol.10, 1977, p.20]Afghani was a pragmatic leader who realized that, at that particular time, a single government for the whole Ummah would not be acceptable. He expounded, I am no pleading that a government of one single ruler should be accepted by all (these countries), because to accomplish this is probably very difficult. But I do really expect the predominance of the Qur’anic rule over all of them, and they should make Islam a means of their unity. [Al-Urwat al-Wuthqa, Jamal al Din Afghani, Cairo, 1957, p.72]The other pioneering Movement was launched in British occupied India for the demand of the restoration of Khilafah when the Ottoman Caliphate was abolished in 1924. The Khilafah Movement, as it was called, was based on the spirit of Islamic unity under a universal caliphate. It was an important historical event for the Muslims of India, but had little impact outside.