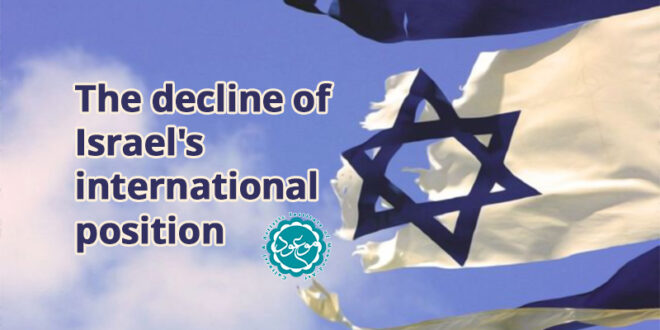 The decline of Israel’s international position

Mouood: Some notable signs of the decline of Israel’s international position

Jahan News International Group, Saman Sefalgar: Significant warnings from Zionist circles to Israeli leaders to refrain from creating tensions against Iran due to concerns about Tehran’s violent reactions to this issue, imposing significant restrictions on the recent visit of Prime Minister Naftali Bennett Israel to the UAE with the aim of not attracting international attention to the event, and the pro-Israel currents relying on issues such as raising the name of this fake regime in popular sporting events, are all manifestations of Israel’s paddling to ensure a minimal survival.

Developments such as the reduction of the US military presence (as Israel’s closest ally in the world) in the West Asian region, the resumption of the Vienna nuclear talks, the reduction of US government pressure on Iran (and Iran’s superior hand during the Nuclear Talks due to the nuclear progress), and consequently the development of Iran’s relations with the countries of the region and the world, the weakening of the process of normalization of relations between the Arab countries and Israel (within the framework of the “Ibrahim Agreement”), and finally, the widening of the Israeli government’s gap with the new US administration are the evidence.

The escalation of Israel’s internal tensions (especially by the Arabs living in the territories controlled by the Zionist regime) has put Israel in a very unstable and, of course, dangerous situation.

The mentioned events have created a kind of unrest among Israeli officials, causing them, for example, to resort to rhetoric in the face of issues such as the Iranian nuclear issue, and to present baseless threats that even former high-ranking officials have not made. Israelis also acknowledge that these threats are unsupported, but try to maintain their image so that they may be able to keep their internal disintegration out of the public eye. In this regard, in recent times, we can point to three signs of the serious instabilities in Israel’s international position, and poke at the fact that the Zionists are essentially moving in a way to beg for attention from international public opinion.

1st: The strange case of Naftali Bennett’s trip to the UAE

During the recent visit of Israeli Prime Minister Naftali Bennett to the United Arab Emirates, as an unprecedented trip, the Israeli side tried to make it a remarkable diplomatic success. They tried to lead other Arab countries towards the normalization of relations with it, which was practically a complete failure.

The main reason for this was that the Emirati side did not even allow the Israelis to bring their reporters with them. Also, the UAE Crown Prince Mohammed bin Zayed did not allow anyone other than the Prime Minister of Israel and his entourage to attend to his palace. This Emirati way of welcoming the Israeli Prime Minister was practically an objective manifestation of hosting a party whose existence was not very satisfactory.

The host was well aware of the negative and unfortunate consequences of hosting such a party too. That is why the Emirati people did not want the Israeli Prime Minister’s visit to their country to attract international attention. Besides the unfavorable position of Israel in the region, it was a clear message from the UAE that the costs of communication with Israel for those countries that want to normalize relations with this regime are crucial.

2nd: Israel and the “begging for attention” at an international sporting event

Recently in Qatar, a friendly match was held between the teams of Arab stars and world stars with the focus on celebrating the addition of the “Arab Cup” to the official FIFA calendar and to conduct extensive publicity in this regard. The main sideline of the match was the embossing of the fake flag of the Israeli regime on the shirts presented on the players’ uniforms and the presence of “Avram Grant”, the former coach of the Israeli national football team, in this sporting event as the coach of the world stars. An issue that caused some players, including three Algerian players, to refuse to attend the sporting event.

The shirts of the players of the two teams. An issue that faced a lot of controversies, especially among the Arab, Islamic and Iranian countries.

Meanwhile, the surprising presence of Mehdi Mahdavi Kia, a former player of our national team, in this event with a dress in which the flag of the Zionist regime was also placed in a corner, has caused widespread criticism of this former national team player. This is true even for other players from Arab and Muslim countries who have tried to wear this dress.

It is noteworthy, however, that Israel’s work has reached a point where even the limited display of the Israeli flag at sports events, with every trick, faces heavy critical reactions. It is an issue that is in itself an objective manifestation of Israel’s isolation and at the same time its many attempts to raise itself. An issue that, in the long run, is a sign of the decline of the position of the fake Israeli regime.

3rd: The discrediting of the anti-Iranian threats of the Zionist regime

At the same time as the resumption of the Vienna nuclear talks with the new Iranian government started, Israel has posed widespread threats against our country and, while making false accusations that Iran is close to acquiring nuclear weapons, has repeatedly resorted to military action and the need for adventure.

Interestingly, even inside the United States, no one pays attention to these claims and demands of the Israeli leaders against Iran, and many credible media outlets report significant gaps between Tel Aviv and Washington on the issue of Iran. In practice, this has left Israel with little choice but to confront Iran.

A recent article in the Israeli newspaper Hearts emphasizes that any Israeli action in attacking Iran could have serious consequences for the regime, effectively putting it in a critical position.

In particular, the recent exercise of the Great Prophet 17 by our country and the attack with a flood of ballistic missiles on the simulated site of the Dimona nuclear power plant in the occupied territories once again reminded Iran’s rational action to the leaders of this regime. In this context, Israel is severely isolated, and ultimately, as Alexandra Hall, an analyst at National Interest, writes in an article: “Israel has no choice but to accept the resumption of the UN Security Council and what is ultimately desirable to Iran.”