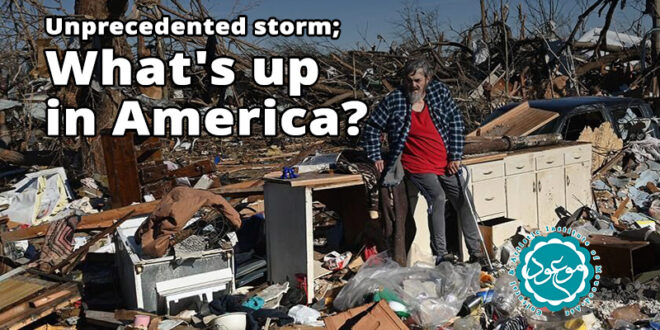 News analysis: The most unprecedented storm in America; Extensive, heavy and coordinated censorship on the subject of the recent American storm.

A note was written by Mohammad Kazem Anbarloui, in Resalat newspaper states: the world’s news agencies, especially the American news agencies, reported last week a severe storm, which was called the most unprecedented storm in American history. The storm hit at least 17 million people in Illinois, Kentucky, Tennessee, Missouri, Arkansas, and Mississippi, displacing residents from their homes.

Aerial photographs of the devastation of the recent hurricane show widespread devastation that some commentators have said; It is as if a massive aerial bombardment has been carried out to destroy entire cities.

“There is no hope of anyone surviving the tornado,” CNN said in a report on the storm. The governor of Kentucky called the recent hurricane the most destructive hurricane in US history and immediately declared a state of emergency.

“We still do not know how many people were killed in the storm and what the damage was. We are facing a catastrophe,” Biden said in his first reaction. 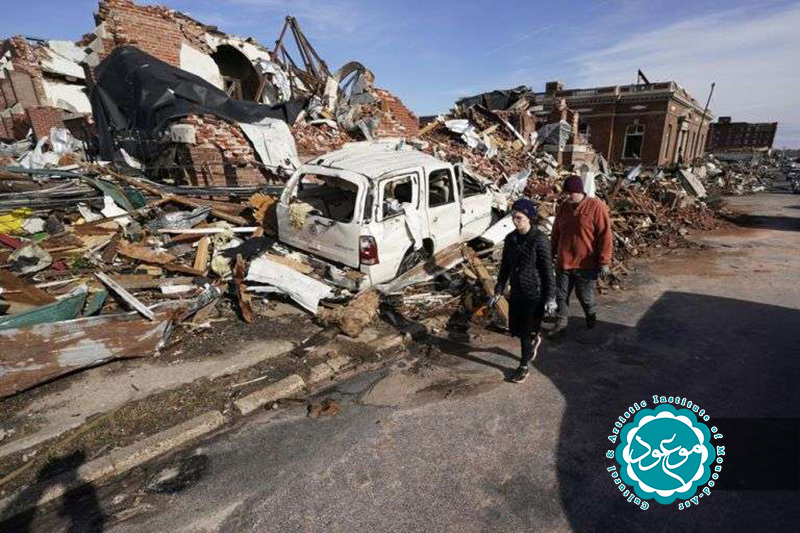 The governor of the state of Kentucky announced just two days ago: the capacity of the morgues in this state is full and the morgues are not enough to hold the bodies of the victims of the storm.

The houses are destroyed and all the inhabitants are dead! Despite the description of the tragedy by American and non-American news agencies, none of the news and pictures published of the dead and displaced people show large queues of people to get food. 17 million people and in some reports 50 million people were displaced from their homes under the whipping of the new storm, and many were killed and injured, but it seems that there was a pre-arranged agreement that the dimensions of this tragedy would be severely censored and the news community inside and outside the United States.

They are still unaware of the dimensions of this catastrophe. Why?! This is a question that must be answered by world-renowned news agencies, including American news agencies.

If one-thousandth of this incident took place in Iran or Tehran, tens of cameras and hundreds of local and foreign reporters would be planted in the four corners of the subject, and at the same time the reaction of the people and officials would be criticized, and thousands of stories would be transmitted to the world.

In two or three days, either as the tenth or the eleventh news, our radio station showed pictures for a few minutes and broadcast news from the official authorities, which was extremely controlled!

What’s up in America

What is going on in America? What do its rulers do? In an age of information explosion and astonishing communications, what a powerful hand that is so dominant in managing news and reporting that a destructive and unprecedented storm, which the president calls a “catastrophe,” displaces millions and kills thousands. “Breeze shows”?! Behind this news policy is a theory of “communication” and information. Communication scholars must expose this theory.

Share
Previous Carbon emissions may increase as climate warms
Next Are the Zionists thinking of destroying Al-Aqsa Mosque?