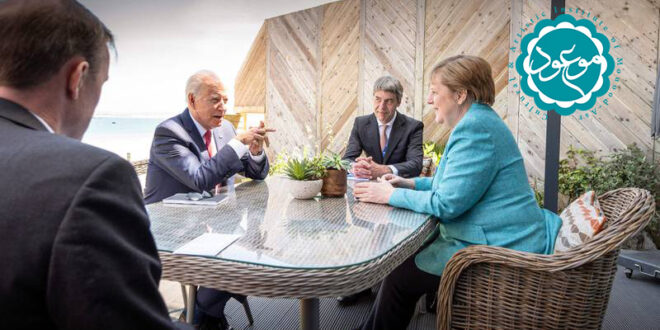 German Chancellor Angela Merkel, right, and US President Joe Biden would like to secure a nuclear deal with Iran. But at what cost? AFP

According to Mouood, quoting by The National News:

What a Biden election setback means for Iran

Europe and America seem to have an understanding. US President Joe Biden is lobbying the continent, as well as Nato, to get behind his vision of a transatlantic political and security partnership that focuses on China’s rise. In exchange, Europe as a collective is seemingly doing Iran’s bidding in the nuclear negotiations involving the five permanent members of the UN Security Council – namely China, France, Russia, the UK and the US – plus Germany.

On Iran, Mr Biden has deferred to Europe’s leaders by following their lead, instead of them following his, in what is an unusual shift in the Euro-American dynamic. This is likely to be a bug, not a feature, in the long-term relations between these allies, as it would be difficult to imagine Washington sitting in the backseat of a car driven by a continent that, after all, doesn’t speak with one voice on the world stage.

Unfortunately, Europe has been less beholden to the liberal values that it claims to espouse by attempting to bring Iran in from the cold, starting with the nuclear talks. The continent’s main powers have decided that their interests are best served by making concessions to Iran in these negotiations, even as the latter undermines the sovereignty and dignity of several Arab countries with whom individual European member states claim to maintain strong relations, such as Lebanon.
By now, it is clear that the P5+1 countries have fully agreed to Iran’s demand of excluding any discussion regarding its regional behaviour from the Vienna talks being held with the purpose of reviving the 2015 nuclear deal. The European powers are still hoping to convince the regime to include aspects of its ballistic missile programme in the talks. Clearly, they are more concerned about its long-range missiles, which the continent could be vulnerable to in the event of an attack from Tehran, than they are about its short and intermediate-range missiles, which threaten Middle East security.

Lebanon, in particular, is bearing the brunt of this emollient approach, with Tehran being the primary force behind its proxy Hezbollah’s seizure of the levers of the state and its siege upon the country’s judiciary. Having given in to Iran’s diktats means that the Europeans’ stated concern for Lebanon’s state of affairs has only rung hollow.

Thanks to their efforts, the Biden administration has agreed to re-launch talks with Iran in Vienna on November 29. The US president is said to have discussed the Iranian question with his European counterparts at the recent G20 meeting in Rome and during the ongoing Cop26 climate summit in Glasgow.

In all likelihood, the JCPOA – as the all-but-dead 2015 deal is known – will be revived before the year ends and serve as a farewell gift to German Chancellor Angela Merkel, given her determination to secure a deal. The negotiations are likely to intensify also because of Tehran’s urgent need for the US-led sanctions to be lifted and Europe’s rush to benefit from the windfall.
This week’s local election in the US, the results of which are a damning referendum on Mr Biden’s 10 months in office, could be seen as another reason for the renewed urgency. The president is in need of a foreign policy victory and increased co-ordination with Europe will only help, particularly after his administration’s chaotic withdrawal of US-led troops from Afghanistan in August.

Some in Washington, including those within the military establishment and the opposition, have begun resisting Europe’s bidding on behalf of Iran over concerns it is undermining American interests and giving Tehran a blank cheque to escalate its aggressive behaviour against Lebanon and other Arab countries.

Lebanese Prime Minister Najib Mikati, who came to power in September with Hezbollah’s support, has been fed up of the obstructionism and unilateralism being unleashed on his government from “within”. He is pushing back against the sort of “interference by the cabinet in the work of the judiciary” being pursued by Hezbollah and the Amal Movement.

Mr Mikati’s government is so weak, he has been unable to either dismiss or rein in Information Minister George Kordahi for his inflammatory remarks over the war in Yemen that sparked a diplomatic rift between Lebanon and the Gulf countries. But, then, Mr Kordahi can get away with holding hostage Lebanon’s national interests because he knows no European state, or the Biden administration for that matter, will intervene.

What these western powers are doing by turning a blind eye to Iran’s activities in Lebanon and elsewhere is that they are betraying their own values.

The West’s duplicity means that the Vatican City is required to intervene in Lebanon’s affairs and help to stop the terrifying political, humanitarian and legal freefall in the country. With Christians making up roughly one-third of its population, the Holy See has a strong enough reason to do so. Crucially, it also has leverage that it must, therefore, use to pressure the global powers – particularly the US, Russia and, yes, its fellow European states – to hold Tehran’s feet to the fire.

Indeed, the Vatican can and must offer more than prayers in its assistance to Lebanon

Previous Israel has purchased a military air base inside the Republic of Azerbaijan
Next Why is it so hot in the Middle East?