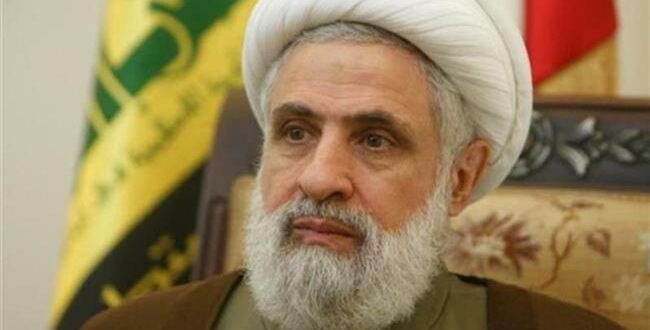 Sheikh Qassem: Arab kingdoms back Israel to save themselves

A senior Hezbollah official slams Israel as the main challenge facing the Middle East, saying certain Arab governments back the regime as a means of maintaining their power at home.

“However, certain countries contribute to Israel’s aggression, and some Arab countries even support this regime in order to preserve their seats of power in their home countries,” he noted.

He was referring to reported contacts and dealings between a number of Arab states and Israel.

Egypt and Jordan are the only two Arab governments that have official diplomatic Israeli ties and host Israeli missions. The rest have no diplomatic relations with the Israeli regime, seeking to portray themselves as the traditional adversaries of Tel Aviv and the upholders of the Palestinian cause.

Even so, reports have indicated that several of them, including Saudi Arabia and the United Arab Emirates, have had secret relations with Tel Aviv, covertly appeasing the regime.

In November 2015, The Associated Press reported that Israel was set to open a “permanent mission” in the UAE, which it said was to operate as part of the International Renewable Energy Agency in Abu Dhabi.

Also, late last May, the Middle East Eye news portal reported that Israel and some Arab countries, including the UAE, Egypt, and Jordan, were planning to overthrow Palestinian President Mahmoud Abbas and replace him with a former leader of the Fatah movement.

To the contrary, Qassem said, Israel always protests Hezbollah, Palestinian resistance movements and Iran, saying they do not leave the entity in peace, “as if this regime has the right to plunder other lands, [too],” he said.

Qassem further said Israel “is the invader, which is the problem, not the resistance, which has resorted to defense to preserve its dignity.”

“Israel knows well that in the event it staged any sort of war in the region, it would be suffering a heavy defeat.”

Israel forced itself onto the region after full-on Western-backed military operations against Arab territory in 1948. In 1967, it went on to seize more such lands belonging to Palestinians, Lebanese, and Syrians.

Hezbollah helped Lebanon defend itself against Israeli wars in 2000 and 2008, and eject the invaders. The Palestinian resistance too forced Tel Aviv to pull out of the Palestinian territory of Gaza Strip in 2005.

The Islamic Republic has invariably asserted support for the resistance in the face of the usurping regime.