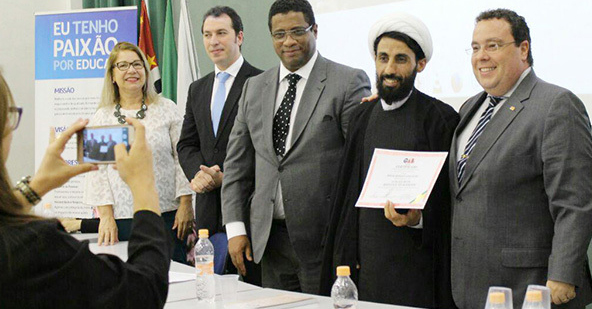 Enlightenment about Wahhabi and Salafi movements at Brazilian universities

in the light of the recent Islamophobic movements all around the world, a conference was held at the Brazilian Anhanguera University to discuss Islam and the western world.

In this conference, Hujjat al-Islam Hussain Khalil Lou, director of Imam Mahdi Center, delivered speeches in the presence of students and professors.

Pointing out at the political and cultural developments in the past decade, he spoke about the deceitful empire of media in western countries.

He then pointed out at the emergence of the terrorist movements like ISIS and argued that the root of all these anti-Islamic movements is in western countries.

“Corruption, and aberration of the rulers in middle-east especially in Saudi Arabia has benefited the Arrogant Powers”. He then added.

Pointing out at the Salafi and Wahhabi movements he said, “Majority of Muslims believe in tolerance and unity among different religions and creeds”.

“Shiite Muslims too firmly believe in communication and exchange of ideas between religions in order to be the propagators of pure Islam in Latin America” he continued.

In the end of this conference,the honorary diploma of the Brazilian association of lawyers was granted to Hujjat al-Islam Hussain Khalil Lou by the director of this association.

It is noteworthy to say that the Anhanguera University is the second largest university in Brazil with 67 colleges and 650 institutes all across Brazil.