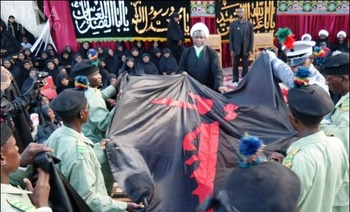 The Kaduna State Government has issued an order declaring the multireligious Islamic Movement in Nigeria, IMN, an unlawful society.

The government ridiculously claimed the action was taken to preserve peace and security in the state, and to ensure that all persons and organisations are guided by lawful conduct and with due allegiance to the Nigerian state and its constitution.

“The Kaduna state executive council approved the making of this order following deliberations at its meeting of Thursday, 06 October 2016,” Samuel Aruwan, a spokesperson to Governor Nasir El-Rufai, said in a statement on Friday.

The most awkward decision is that which tries to coercively bury an ideology. No amount of hatred or biased decision can fight an ideology to finish. Islamic movement is an ideological movement not a party or corporate body that operates in anonymity. The guiding principles of the movement are those principles as prescribed by the Islamic faith. The IMN is philosophically oriented from the philosophy of Islam and a movement fully guided by Islamic law.

Friday’s announcement occurs several months after over 700 members of the movement were killed by Nigerian soldiers.

To arrive at its decision, the Kaduna government said it relied on the findings of a panel it established to investigate the army’s attack on the movement.

Read the full statement by the Kaduna government on the ban below:

The Kaduna State Government has issued an Order declaring the Islamic Movement in Nigeria (IMN) an unlawful society. This action is taken in the exercise of the government’s duty to preserve peace and security in the state, and to ensure that all persons and organisations are guided by lawful conduct and with due allegiance to the Nigerian state and its Constitution. The Kaduna state executive council approved the making of this order following deliberations at its meeting of Thursday, 06 October 2016.

The Order, which has been signed by the Governor, draws on powers vested by the Constitution and the laws of Kaduna State. Section 45 (1) of the Constitution categorically vests in the Governor the powers to take such measures and actions as are necessary for the promotion and protection of:

public safety, public order, public morality or public health; or
the rights and freedom of all persons in Kaduna State.

Section 97A of the Penal Code (Cap 110, Laws of Kaduna State, 1991) empowers the Governor to declare as an unlawful society any organisation whose activities are dangerous to the security and good governance of the state.

The Judicial Commission of Inquiry into the Zaria Clashes of 12-14 December 2015 found that the IMN is not a registered organisation, that it has a paramilitary wing and that its members do not recognise or respect the laws of the country and the duly constituted authorities that have the responsibility to secure and administer the country.

The Declaration Order noted that since the regrettable events in Zaria which resulted in the loss of 347 lives, the IMN “has overtly continued with unlawful processions, obstruction of public highways, unauthorized occupation of public facilities including schools without regard to the rights of other citizens and the public peace and order of the State”.

The Order noted that “these acts, if allowed to go unchecked will constitute danger to the peace, tranquillity, harmonious coexistence and good governance of Kaduna State”.

The Declaration Order, which comes into effect on Friday, 7 October 2016, provides for the prosecution of persons that may be in breach of its provisions under the laws of Kaduna State:

“Whoever manages, or is a member of the said Society under any appellation or mutation with the propensity of causing the breakdown of law and order, or operates in a manner dangerous to the good governance of the State shall, from commencement of this order, be prosecuted in accordance with the Laws of Kaduna State.”

Sections 97A and 97B of the Penal Code prescribe a penalty of imprisonment for seven years or a fine or both for any person convicted for belonging to an unlawful society.

The Kaduna State Government reaffirms its vigorous commitment to upholding the right of citizens to practice the religion of their choice. These are rights fully protected by Sections 38 and 40 of the Constitution.

Such rights to freedom of thought and worship must however be exercised in ways that do not infringe on the rights of others, and should not subject other people to distress and inconvenience.

Share
Previous The fourth “Ghadir Conference” to be held in Germany + Poster
Next Story of ‘Hussain unites us campaign’ during Ashura in Dearborn, Michigan