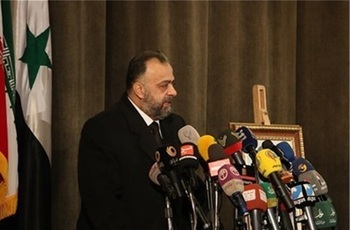 Stressing that the Syrian government and nation still remain committed to defending values of the Islamic world, he said that as long as the Syrian army and nation as well as the Resistance Front are there, al-Aqsa Mosque will not be demolished.

The Syrian minister added that the army is fighting against Takfiri terrorism in the Arab country, safeguarding both Islam and Christianity’s sanctities under the leadership of President Bashar Assad.

Syria has been gripped by civil war since March 2011 with various terrorist groups, including Daesh (also known as ISIS or ISIL), currently controlling parts of it.

According to a report by the Syrian Center for Policy Research, the conflict has claimed the lives of over 470,000 people, injured 1.9 million others, and displaced nearly half of the country’s pre-war population of about 23 million within or beyond its borders.