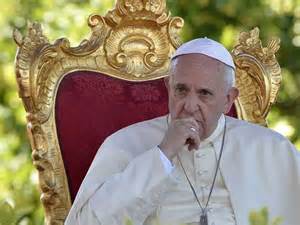 Grand Ayatollah Makarem Shirazi wrote a letter to Pope Francis to appreciate his recent remarks in which he said “Islam is not Terrorism”.

The text of the message is as follows:

In the Name of God

To His Eminence Pope Francis

The Leader of the Catholic world

I’m really delighted to have heard your comments during your last trip to Poland in which you stated “Islam is not terrorism” and further dismissed all divine religions of any form of violations or radicalism. Your wise stand regarding the religion of Islam and dismissing it of inhumane actions carried out by Takfiri groups such as ISIS is really admired.

It goes without saying that clear and strong positions taken by world’s religious leaders against the inhumane violations, especially those carried out under the name of religion in any part of the world, is a vital obligation.

I strongly condemned Takfiris’ vicious terrorist attack on the French Church which led to the cruel murder of a priest; as I’ve already said in my previous letter, I clearly declare, according to all Muslim Ulama (Scholars) as well as the vast majority of Muslim community, Takfiri sects are non-Islamic and are considered as the world’s worst crisis in the present era. We’ve been warning the world of this great danger for years.

During last two years, two International conferences have been held in the holy city of Qom on the issue of Religious deviation and threats of Takfiri movements in which numerous prominent Islamic figures along and scholars from 80 different countries took part. During the events, all Islamic scholars unanimously condemned any form of violence, terrorism and murder of innocent people under the name of religion and announced such actions absolutely non-Islamic. They also warned those merciless, ignorant and murderer minorities that their path ends in hell!

Undoubtedly, the Takfiri terrorist groups would have been destroyed by now if it wasn’t for the arrogant powers’ support and helps to them.

As your eminence have remarked, such violations have nothing to do with religions or denominations, rather they are originated from hegemonic government’s inferior materialistic objectives in order to collect illegitimate wealth. Fortunately, public awareness has been raised regarding radical and extremist behaviors and we can be hopeful that such actions finally come to an end.

In the end, I pray to God almighty for your success in spreading kindness, peace and spirituality in the world.

Share
Previous Future of Israel Not Long, Our Choice is to Stay in Aleppo, Aoun and Berri Our Candidates – Hezbollah Leader
Next Like Chibok, Like Zaria: The Self-fulfilling Prophecy