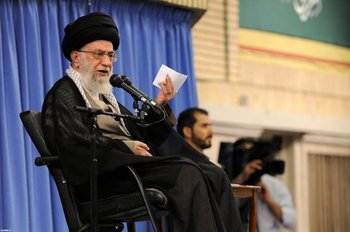 Ayatollah Khamenei’s important speech on Bahrain and the region

Describing the martyrs as the pillars of strength and power of the Islamic Republic of Iran’s establishment, the Leader of the Islamic Revolution said: “The only way for Islamic Iran to make progress is to revive the revolutionary and combative spirit.”

At the start of his speech, Ayatollah Khamenei extended condolences on the anniversary of the martyrdom of Imam Ali (AS), the first Shia imam, describing the venerable imam as the most influential martyr in the history of humanity, martyr of altar and martyr on the path of righteousness, firmness and steadfastness. The Leader of the Islamic Revolution said 35 years have passed since the deadly bomb blast at the headquarters of the Islamic Republic Party in 1981, adding: “The perpetrators of this crime are a wicked and ruthless terrorist group who, after having fled the country, have during these years been sheltered by European countries and the US who claim to be advocates of fighting terrorism and supporting human rights.”

The Leader of the Islamic Revolution described this issue as a big and historical scandal for European countries and the US, adding: “This terrorist group comprises those who joined struggles with the claims of defending people and even defending Islam, but later they gave rise to mishaps like the Haft-e Tir (June 28) incident and the assassination of ordinary people and in the end they closed ranks with someone like [former Iraqi dictator] Saddam [Hussein] and they are still enjoying US support.”

Ayatollah Khamenei said the June 28, 1981 incident was a big one containing lessons. The Leader of the Islamic Revolution criticized the little work done to introduce martyrs’ important events and incidents following the 1979 Islamic Revolution to current generation, saying: “After 35 years, we do not have even a single movie or a play or a novel about the Haft-e Tir incident and Martyr [Ayatollah Mohammad] Beheshti (then secretary general of Islamic Republic Party) and the martyrs of this incident and the fact that it is still alive is because of the revolutionary spirit of people themselves.”

Referring to books written about operations and martyrs of Sacred Defense (1980-1988 Iraq-Iran War), Ayatollah Khamenei recommended everyone, the youth in particular, to study those books carefully, saying: “Although many books have been written in this field there is still ground for writing about the different aspects and dimensions of Sacred Defense and the lofty martyrs of war, because the behavior, words and deeds of each of the martyrs open a window into a world of cognition.”

The Leader of the Islamic Revolution said an outstanding feature of the Sacred Defense was the presence of popular forces with strong motivation and from different walks of life, with no monopoly by official forces on the war, noting: “Today, we recommend government officials to benefit from people’s potentialities in different sectors particularly the economic one with a view to a people-run economy.”

Ayatollah Khamenei went on to highlight the issue of defending the holy shrines of the Prophet Muhammad’s Household and the combatants who were martyred fighting the shrines in Syria, adding: “This issue is one of astonishing events and a wonder in history that young [combatants] from Iran and other countries, with strong faith and motivation, leave behind their young wife and minor children and their tranquil life to combat for God’s sake in a foreign country and they embrace martyrdom on this path.”

The Leader of the Islamic Revolution described the strong faith of holy shrine martyred defenders and the patience of their families as aspects of this wonderful issue, saying: “Another aspect of this issue pertains to the elements of the strength of the establishment of the Islamic Republic of Iran, which is based on faith, determination and willpower of pious people, combatants and martyrs.”

Ayatollah Khamenei said arrogant enemies must be dealt with based on a revolutionary spirit adding: “Faith in God, belief in jihad and the strong motivation of faithful and revolutionary youth are the sources of Islamic establishment’s power in an asymmetrical war with the Arrogant Front and although they see the effects of this source of power, they are unable to analyze its reality and therefore they resort to violent and cruel methods.”

The Leader of the Islamic Revolution said the formation of Takfiri terrorist groups like Daesh was one of these violent methods for countering the Islamic establishment, adding: “The main objective behind the creation of Takfiri terrorist groups and their actions in Iraq and Syria was to invade Iran, but the power of the Islamic Republic establishment pinned them down in Iraq and Syria.”
Noting that Takfiri terrorist groups make no difference between Shias and Sunnis and that they target every Muslim who defends the Islamic Revolution and is the enemy of the US, Ayatollah Khamenei referred to ongoing events in Bahrain and said “In Bahrain, the issue is not a Shia-Sunni [strife] either. Rather the main issue involves the tyrannical rule of a selfish arrogant minority over a vast majority.”

The Leader of the Islamic Revolution said the Bahraini rulers’ aggression of diligent scholar Sheikh Isa Qassim was an indication of their idiocy, noting: “Sheikh Qassim is a person who, as long as he could speak to people in Bahrain, used to prevent them from radical and armed movements, but the rulers of Bahrain do not understand that act of aggression against this diligent scholar means removing the barrier in front of epic and spirited youth in Bahrain for any action against the regime.”

Noting that arrogant powers and their stooges are unable to know people and the level of faith in the society and they make miscalculations, Ayatollah Khamenei said: “The right way is to move on the path of Islam and place trust in Almighty God, and only a faithful and diligent nation with firm determination could overcome obstacles and move ahead.”

The Leader of the Islamic Revolution recommended everyone to benefit more than before from the Nights of Destiny and the final days of the holy fasting month of Ramadan, saying: “During these nights and dawns, which are time for recourse [to God] and seeking forgiveness, by seeking assistance from exalted spirits including the spirits of martyrs and wholeheartedly demanding their mediation, we have to pray so as to satisfy Almighty God.”

Prior to Ayatollah Khamenei’s remarks, Mohammad Ali Shahidi Mahallati, a representative of the Leader of the Islamic Revolution and the head of the Foundation for Martyrs and War Veterans’ Affairs, referred to the necessity of familiarizing the younger generation with the sacrifice and valance of combatants, saying: “Formation and activation of the Secretariat for the Supreme Council of Promotion and Development of the Culture of Sacrifice and Martyrdom, formation of cyber front, development of war veteran societies, implementation of gratitude projects and formation of the Economy of Resistance Committee with a focus on empowering war veterans have been among the pivotal measures undertaken by the Foundation for Martyrs and War Veterans’ Affairs.”

Share
Previous US drone strike kills 21 people in Afghanistan
Next Martyrdom of Imam Ali, His Life, Achievements and Merits