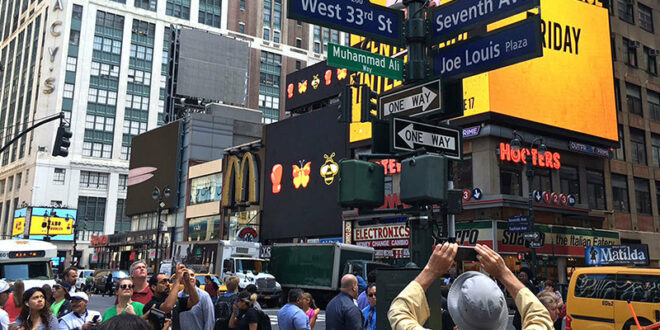 On Tuesday, the legendary boxer’s daughter Laila Ali took to Instagram, revealing that NYC temporality renamed West 33rd Street after her dad in the wake of his death on Friday.

“New York City temporarily named a street after my father. Such and honor for the G.O.A.T. [Greatest Of All Time],” she wrote. “I’m sending love and positive vibes to all of you who have ever lost someone you love! Thank you for all of you kind words and condolences.” In the pic, a construction worker hangs the street sign – Muhammad Ali Way – right under the original, as a large photo of Ali hangs in the background in Madison Square Garden.

The world mourned on Friday when news broke that Ali had died in a Phoenix-area hospital, after days of being treated for respiratory complications.

“After a 32-year battle with Parkinson’s disease, Muhammad Ali has passed away at the age of 74. The three-time World Heavyweight Champion boxer died this evening,” spokesman Bob Gunnell said in a statement at the time. “The Ali family would like to thank everyone for their thoughts, prayers, and support and asks for privacy at this time.”

Just hours before his death, Laila, 38, took to social media, sharing a sweet photo of her father and daughter.

“I love this photo of my father and my daughter Sydney when she was a baby,” Laila wrote on Facebook alongside a pic of Ali kissing his granddaughter. “Thank for all the love and well wishes. I feel your love and appreciate it!!”