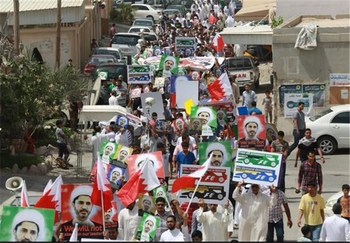 Demonstrators in Bahrain have taken to the streets to express solidarity with political prisoners and jailed activists, in particular prominent opposition figure Sheikh Ali Salman. In Abu Saiba, the protesters demanded the release of the 49-year-old secretary of the main opposition al-Wefaq and other political prisoners.

In Abu Saiba, the protesters demanded the release of the 49-year-old secretary of the main opposition al-Wefaq and other political prisoners.

The protesters carried portraits of Salman and other imprisoned dissidents as well as national flags and chanted slogans against the ruling Al Khalifah regime.

They vowed to continue street protests until their pro-democracy demands are met and their rights restored.

Sheikh Salman was arrested on December 28, 2014, on charges of attempting to overthrow the Al Khalifah regime and collaborating with foreign powers.

He denies the charges, saying he has been seeking reforms in the kingdom through peaceful means.

In June 2015, a Bahraini court sentenced him to four years in prison on charges such as insulting the Bahraini Interior Ministry and inciting others to break the law. He was acquitted of seeking regime change.

The Office of the UN High Commissioner for Human Rights (OHCHR) has repeatedly called on the Manama regime to immediately release the al-Wefaq leader.

Since February 14, 2011, thousands of anti-regime protesters have held numerous demonstrations on an almost daily basis in Bahrain, calling for the Al Khalifah family to relinquish power.

In March that year, troops from Saudi Arabia and the United Arab Emirates were deployed to the country to assist the Bahraini regime in its crackdown on the peaceful protests.

Scores of people have been killed and hundreds of others injured or arrested in the crackdown.

Amnesty International and many other international rights organizations have frequently censured the Bahraini regime over the rampant human rights abuses against opposition activists and anti-regime protesters.

The United States, which has its Fifth Navy Fleet deployed in the tiny island, and some other Western governments have largely turned a blind eye to the crackdown.