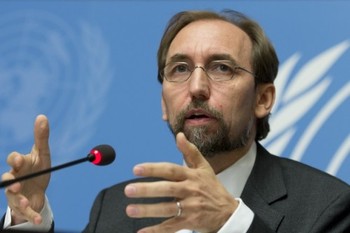 The Bahraini regime described on Monday (March 14, 2016) the statement made by the UN High Commissioner for Human Rights, Zeid Ra’ad, as “biased and lacking credibility,” also dismissing it as “an unacceptable interference in the internal affairs of the kingdom.”

During its weekly meeting, headed by Prime Minister Khalifa bin Salman Al Khalifa, the cabinet added that the statement “does not reflect the existing positive cooperation between Bahrain and the Office of the United Nations High Commissioner for Human Rights (OHCHR).”

The High Commissioner had stated, during the 31st session of the Human Rights Council in Geneva, that little has been done on the levels of accountability and ending impunity with regards to those involved in the human rights violations in Bahrain.

Commenting on a question raised by Americans for Democracy and Human Rights in Bahrain (ADHRB) on Thursday (March 10, 2016), he said: “There is a clear realization inside and outside that little has been done in the fields of accountability,” expressing his serious concern about the increasing cases of impunity, especially concerning violations committed against “protestors and detainees in addition to torture claims.”

Ra’ad further called on the Bahraini government to release all prisoners in connection with peaceful protests, particularly minors and women and to reconsider the July 2014 amendments made to the nationality law, which allows revoking the citizenship of dissents.