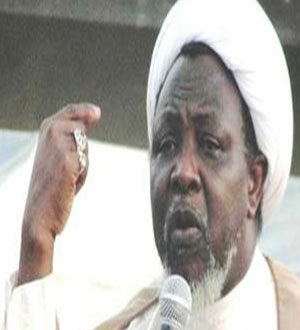 Who is Sheikh Zakzaky, Nigeria’s Most Powerful Shiite Muslim?

Nigeria’s foremost Shiite Muslim cleric is currently being held in custody after violence broke out between his followers and the Nigerian military.
Sheikh Ibrahim Zakzaky, leader of the Islamic Movement in Nigeria (IMN), was detained after deadly clashes between Nigerian soldiers and his followers in the city of Zaria, Kaduna state, in northern Nigeria. At least 60 people reportedly died in the violence, which the Nigerian Army claimed was a response to an assassination attempt by the sect’s members on the Chief of Army Staff, Lieutenant General Tukur Buratai.

The clashes and al-Zakzaky’s arrest have sparked protests across Nigeria by Shiite Muslims, a significant minority in the Sunni-majority country. They also appear to have stoked tensions between the Nigerian state and a movement (IMN) which claims to have been targeted before and has the backing of a powerful Shiite ally.
Who is Sheikh Ibrahim Zakzaky?
Hailing from the Nigerian Shiite holy town of Zaria, Zakzaky began propagating Shiite Islam around 1979, at the time of the Iranian revolution—which saw Iran’s monarchy overthrown and replaced with an Islamic republic under Ayatollah Khomeini. Zakzaky believed that the establishment of a republic along similar religious lines in Nigeria would be feasible. He has been detained several times due to accusations of civil disobedience under military regimes in Nigeria during the 1980s and 1990s and is still viewed with suspicion by Nigerian authorities.
A woman walks past a painting of Iran’s late leader Ayatollah Ruhollah Khomeini in Tehran December 11. Sheikh Zakzaky drew inspiration from the late Iranian spiritual leader when he began preaching Shiite Islam in Nigeria.Raheb Homavandi/TIMA/Reuters
Zakzaky is the spiritual leader of the IMN, Nigeria’s most prominent Shiite Muslim movement. Of Nigeria’s 180 million population, 50 percent is Muslim, a small minority of which belong to Shiite Islam. According to Nnamdi Obasi, Senior Analyst on Nigeria at the International Crisis Group (ICG), the IMN’s goals are twofold: “to ensure more stringent application of Islamic legal and administrative systems…then ultimately to create an Islamic state in Nigeria.”
What is the status of Shiite Muslims in Nigeria?
Shiite Muslims are generally well-integrated in Nigeria and do not suffer direct discrimination or persecution, according to Bat-el Ohayon, founder of sub-Sahara African consultancy Afrique Consulting Group. Zakzaky’s followers, however, have a strained relationship with the Nigerian security apparatus, says Ohayon. “It appears that there is specific and isolated conflict with the community in Zaria, particularly with Zakzaky,” says Ohayon.
The clashes at a July 2014 Shiite religious procession in Zaria are evidence of this conflict. At the pro-Palestinian rally, known as a Quds Day procession, 34 protesters were reportedly killed by Nigerian soldiers, including three of Zakzaky’s sons. At the time, the Nigerian Army claimed that it was acting in self-defence. More recently, Shiite followers of Zakzaky were targeted in a suicide bombing that killed at least 21 people during a procession from Kano to Zaria. Despite reports that the militant group Boko Haram claimed responsibility for the attack, Zakzaky claimed the attack was not the work of Boko Haram and suggested that the bombing was orchestrated by the army. The Shiite cleric has no reason to defend Boko Haram, which espouses a fundamentalist interpretation of Sunni Islam and views Shiite Muslims as infidels worthy of death.
Why has Sheikh Zakzaky been arrested?
Zakzaky’s arrest followed a series of events which differ according to the teller. According to the Nigerian military, a motorcade transporting the Army Chief of Staff was blocked by followers of Zakzaky, who began to attack the convoy before troops responded with force. According to the IMN, unarmed worshippers were attacked by the army while conducting a peaceful procession. Clashes took place at three different locations across Zaria, including Zakzaky’s house and the group’s main mosque, according to the Islamic Human Rights Commission, which also reported that Zakzaky’s wife was in hospital after earlier reports stated that she had been killed. Unconfirmed pictures of a bloody Zakzaky have circulated on social media.
What are the movement’s ties to Iran?
Iran, which is known for defending Shiite causes worldwide, has responded firmly to the conflict between the Shiite group and Nigerian soldiers. Iranian president Hassan Rouhani reportedly called his Nigerian counterpart Muhammadu Buhari to urge that a fact-finding mission be set up to investigate the recent violence. Iran also reportedly summoned the head of the Nigerian diplomatic mission in Tehran to protest against the clashes and ask that Shiite Muslims be protected. Zakzaky has previously denied that the IMN receives funding from Iran, but it appears that the movement has a powerful ally in any future disputes.