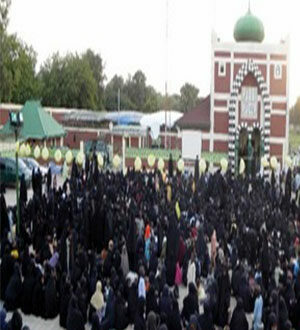 Zaria Massacre: Army deliberately targets reproductive organs of IMN’s women; They shouted ‘there will never be Shia in Nigeria’

I went to Zaria to be interviewed by a Journalist from a major daily Nigerian Newspaper about the Zaria massacre. Before I arrived the Journalist was taken to the Ahmadu Bello University Teaching Hospital, Zaria, where some injured victims of the brutal Zaria massacre by the Nigerian Army are recuperating.

What shocked the Journalist was when he met some sisters of the Islamic Movement of Nigeria (IMN) who were shot by the Nigerian Army in their most private parts and again stabbed in their breasts with rifle bayonets. The Journalist who is a Christian from Southern ‪Nigeria‬ broke down and wept.

One important thing to note here is that the Nigerian Army deliberately targeted the reproductive organs of the sisters of IMN that they shot. The sisters reported that the soldiers were screaming that “there will never be Shia in Nigeria” while shooting their most private parts and stabbing their breasts with rifle bayonets. This is clear genocide, they targeted their reproductive organs so that they will not bring Shias to the world.

Imagine the Nigerian Army shouting anti – Shia slogan while killing defenseless Nigerian in the most inhuman manner. To the brainless idiots who executed the brutal Zaria massacre, killing 1000+ Shia Muslims in Nigeria will end Shia Islam in Nigeria.

Among the question the Journalist asked me was that he interviewed some people and they claimed we are “brainwashing” people to become Shia Muslims. I answered him that nobody us forced to become Shia, it is a choice made willingly and IMN does not discreminate among the Islamic schools of thoughts. And if it is about brainwashing, more than 70% of all the Mosques & Islamic schools in Northern Nigeria are controlled by Wahhabis. And Nigerian Wahhabis have satellite TV station that does nothing but broadcast anti – Shia programs. In their mosques the only thing they do is promoting Shia hate & hate of Christians. Why can’t the Wahhabis brainwash people with all these resources in their disposal?

Finally to the Nigerian authorities who burnt the dead bodies of the victims of the brutal Zaria massacre, there are tonnes of other evidences that you can not destroy. There are hundreds of survivors who witness the heinous crimes and atrocities committed by the Nigerian Army, there are medical doctors and hospital personnels who received some of the deaths and treated the injured. Those who executed that monstrous inhumanity will be brought to justice one day.

Share
Previous Nigerian Govt Secretly Sent Sheikh Zakzaky to France for Treatment!
Next The Death Anniversary of the Lady al-Masouma (AS)